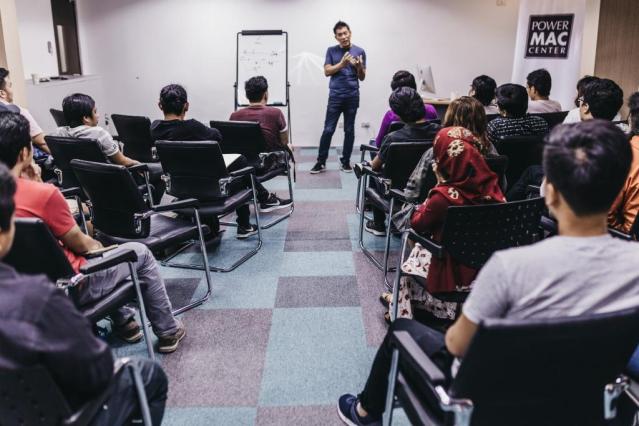 Cannes Film Festival Best Director Brillante Mendoza began the first round of Masterclass sessions for Pixelworx: Cinemansanas 2017 last August 12 and 13. The 23 selected filmmakers embarked on a journey with the award-winning director who lent his expertise on acting, directing, and cinematography.

The exclusive sessions were held at the Power Mac Center Apple Authorized Training Provider in Arnaiz Avenue, Makati City. Participants underwent extensive training and experienced hands-on activities during the sessions, which aim to help them bring film ideas to life.

“We selected a wonderful mix of 23 idealistic students, professionals, and enthusiasts representing the 23 amazing years of Power Mac Center. We are grateful to Direk Dante Mendoza for sharing his time and knowledge and helping us nurture the next generation of Filipino filmmakers,” said Power Mac Center Marketing Director Joey Alvarez.

The last Masterclass session will be held on August 26. After which, participants are required to submit their short films for a chance to win a MacBook Pro Retina or up to P40,000 worth of Power Mac Center gift cards.

‘Do you have a minute?’ film competition, still open

Filmmakers and enthusiasts who missed the Masterclass sessions can still participate in Cinemansanas by sending their 1-minute film entries to the short film competition. Entry is free and open to all residents of the Philippines, provided they are 18 years old and above.

“‘Do you have a minute?’ aims to provide a perspective on how people can share compelling stories through social media, where everything has a shelf life of just 60 seconds. We want to challenge everyone, can you tell an amazing story in one minute?” Alvarez said.

Film entries must be shot using an iPhone and made specifically for this competition. Films may be in any language or have no dialogue at all, whereas foreign language audio or important on-screen text must have English subtitles.

Up to P30,000 worth of Power Mac Center gift cards, full training on Final Cut Pro or Logic Pro X, and an iPad Pro are up for grabs.

All Pixelworx: Cinemansanas activities will culminate in a Grand Movie Premiere at the SM Mall of Asia Cinema on September 21, 2017, with Director Brillante Mendoza as guest-of-honor.