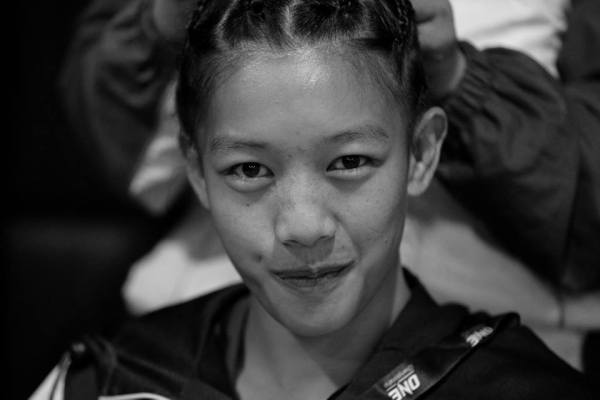 April Osenio, 23, of Team Lakay is going back to the cage one year after her last fight. She will face a Chinese opponent at “ONE: Warriors of the World” at Impact Arena in Bangkok, Thailand on Dec. 9.

Osenio’s fellow Team Lakay fighters Eduard Folayang, Kevin Belingon, Honorio Banario, Joshua Pacio, Danny Kingad, Geje Eustaquio, Edward Kelly and Gina Iniong have all fought at least once in the ONE Championship cage in 2017. Currently, Osenio holds a record of 2 wins and 2 losses while her “ONE: Warriors of the World” opponent Xiong “The Panda” Jingnan, 29, has 9 wins and 1 loss.

Osenio made her ONE Championship debut on March 13, 2015 at Stadium Putra in Kuala Lumpur, Malaysia at “ONE Championship 25: Age of Champions” where she lost to Kirstie Gannaway via rear-naked choke submission at 2:50 of Round 2.

On April 15, 2016, Osenio had her first win as a professional MMA fighter. She defeated Natalie Gonzales Hills via armbar submission at 3:23 of Round 1 at “ONE Championship 41: Global Rivals” at the Mall of Asia Arena in Pasay City, Metro Manila, Philippines.

On Sept. 2, 2016, Osenio had her second and most recent win at “ONE Championship: Unbreakable Warriors” at Stadium Negara in Kuala Lumpur, Malaysia. She defeated Ann Osman via guillotine choke submission at 4:09 of Round 1.

But in Osenio’s most recent fight, she lost to Jenny Huang at the Mall of Asia Arena. Huang submitted Osenio via gogoplata submission at 4:28 of Round 2 at “ONE Championship: Age of Domination.”

On the other hand, Xiong will make her ONE Championship debut at “ONE: Warriors of the World.” In her most recent fight, which took place in Beijing, China on Dec. 5, 2016, she defeated Alena Gondasova of Slovakia via technical knockout via punches on Round 2 at “Kunlun Fight: Kunlun Fight MMA 7” at Kunlun Fight World Combat Sports Center.

“ONE: Warriors of the World” will be headlined by reigning ONE Strawweight World Champion Yoshitaka Naito, 33, of Japan and his challenger Alex Silva, 35, of Brazil. A match between Shannon Wiratchai, 19, of Thailand and Rasul Yakhaev, 26, of Russia will be the co-main event.

Tagged as: ONE: Warriors of the World