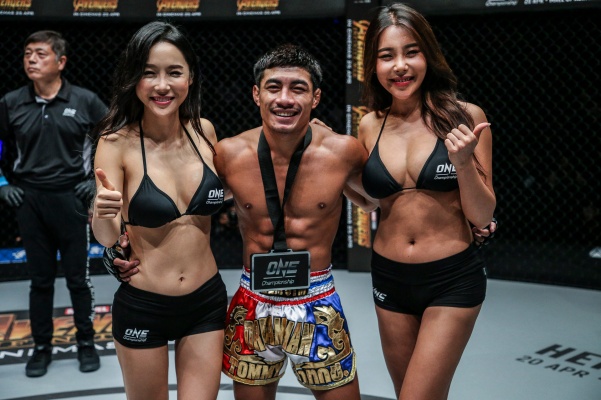 On March 24, 2018, “ONE: Iron Will” shook the Impact Arena in Bangkok, Thailand with the historic superfight between ONE Bantamweight World Champion Bibiano “The Flash” Fernandes of Brazil and ONE Featherweight and Lightweight World Champion Martin “The Situ-Asian” Nguyen of Vietnam and Australia. It was the fifth event of ONE Championship in 2018.

Kritsada “Dream Man” Kongsrichai was the first hometown hero to compete in the cage. He faced Robin “The Ilonggo” Catalan of the Philippines in the fourth bout of the evening, which was also the last bout on the preliminary card.

The bout between Kongsrichai and Catalan ended at 1:40 of Round 1. The former knocked out the latter via slam.

Before “ONE: Iron Will,” the most recent opponent of Kongsrichai was Rabin Catalan, brother of Robin. Rabin lost to Kongsrichai via technical knockout via punches at “ONE: Warriors of the World.”

Kongsrichai made his ONE Championship debut on May 27, 2016. He knocked out Kev Hemmorlor via punches at “ONE: Kingdom of Champions.”

On August 13, 2016, Kongsrichai lost inside the ONE Championship cage for the first time. He was submitted by Joshua Pacio via rear-naked choke at “ONE: Heroes of the World.”

On March 11, 2017, Kongsrichai redeemed himself at “ONE: Warrior Kingdom.” He knocked out Adrian Mattheis via punches.

After defeating Robin at “ONE: Iron Will,” Kongsrichai now has 7 wins and 3 losses. On the other hand, Robin’s record downgraded to 6 wins and 4 losses.

Tagged as: Kritsada Kongsrichai, ONE Championship, ONE: Iron Will, Robin Catalan