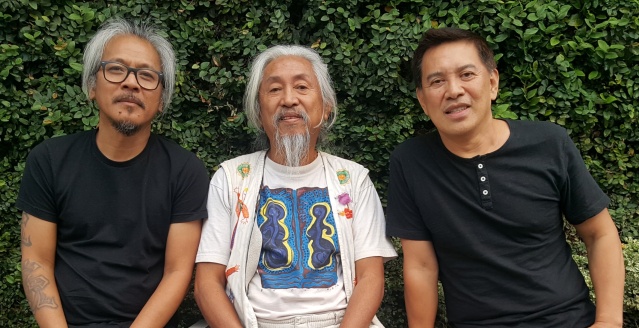 “Lakbayan” (Journey), an omnibus film by Brillante Mendoza, Lav Diaz and Kidlat Tahimik will have its world premiere at the 2018 Busan International Film Festival. It is the very first collaborative project involving the three filmmaking giants of the Philippines.

All filmed in the Philippines in 2017, the three parts of “Lakbayan” are titled “Desfocado” (Defocused), “Hugaw” (Dirt) and “Lakaran ni Kabunyan” (Kabunyan’s Journey). The omnibus film was produced by Solar Pictures with Mendoza and Wilson Tieng as executive producers and Carlo Valenzona as producer.

Along with “Lakbayan,” Mendoza’s most recent full-length film “Alpha, the Right to Kill” will make its Asian premiere at the 2018 Busan International Film Festival. Written by Troy Espiritu, the film stars Allen Dizon, Elijah Filamor and Baron Geisler.

Both “Lakbayan” and “Alpha, the Right to Kill” will be featured in the A Window on Asian Cinema section of the 2018 Busan International Film Festival. The 23rd edition of the annual film festival in Haeundae-gu, Busan, South Korea will run from October 4-13, 2018.

Including the Philippines, 79 countries will be represented at the 2018 Busan International Film Festival. The opening ceremony on October 4, 2018 will be hosted by Korean actors Kim Nam Gil and Han Ji Min.

The three “Lakbayan” directors were all Berlin International Film Festival winners. Mendoza won the Caligari Film Award for “Tirador” in 2008, the same award Tahimik won for “Balikbayan #1: Memories of Overdevelopment Redux III” in 2015, while Diaz won the Alfred Bauer Award for “Hele Sa Hiwagang Hapis” (Lullaby to the Sorrowful Mystery) in 2016 and the Golden Berlin Bear Award for “Ang Panahon ng Halimaw” (Season of the Devil) in 2018.