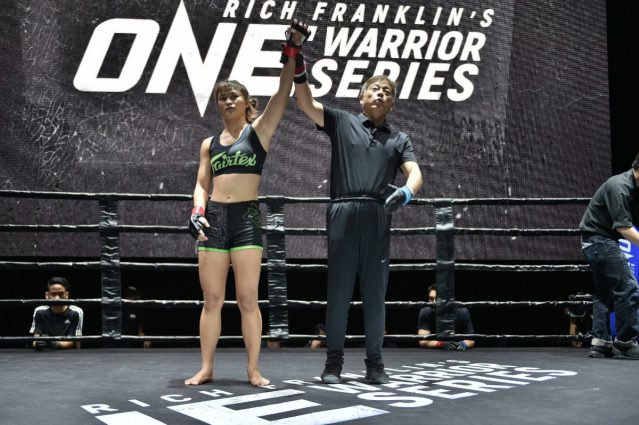 Fighting out of Chinese Taipei and representing Iron Boxing, “Killer Bee” Kai Ting Chuang, 23, is set to defend her ONE Kickboxing Atomweight World Champion title for the first time. Her challenger will be ONE Super Series debutante Stamp Fairtex, 20, of Rayong Province, Thailand.

Born to a family of fruit farmers, Stamp has been competing since the tender age of five and she knows the meaning of hard work. She has already amassed over 100 bouts in her 15-year career.

It was Stamp’s work ethic that brought her to becoming the first-ever sponsored female Thai athlete at Fairtex Training Center in Pattaya, Thailand. On October 6, 2018, she and Chuang will co-headline “ONE: Kingdom of Heroes” at the Impact Arena in Bangkok, Thailand.

“This will be the biggest fight of my career,” Stamp stated. “Everyone wants to be a world champion. The ONE Super Series has the best in the world from all striking disciplines including Muay Thai.”

A Nak Muay, Stamp is making her kickboxing debut at “ONE: Kingdom of Heroes.” The upcoming bout against the reigning ONE Kickboxing Atomweight World Champion will allow the Rayong Province native to show the world her dedication not just to martial arts but to herself as a professional athlete.

Coming from an impoverished background only adds to Stamp’s story and the adversity she has had to overcome. As a professional athlete, she trains on average 30 hours a week and runs nearly 10 kilometers a day, six days a week.

Stamp regularly spars with her male peers at the gym and does daily pad rounds with her trainer and supervised rounds on the bag.  On top of her already intense training regime, she also works with a strength and conditioning coach.

Meanwhile, here is a clip from the bout between Chuang and Yodcherry Sityodtong,19, of Thailand for the inaugural ONE Kickboxing Atomweight World Championship:

Tagged as: Kai Ting Chuang, ONE Championship, ONE Super Series, ONE: Kingdom of Heroes, Stamp Fairtex