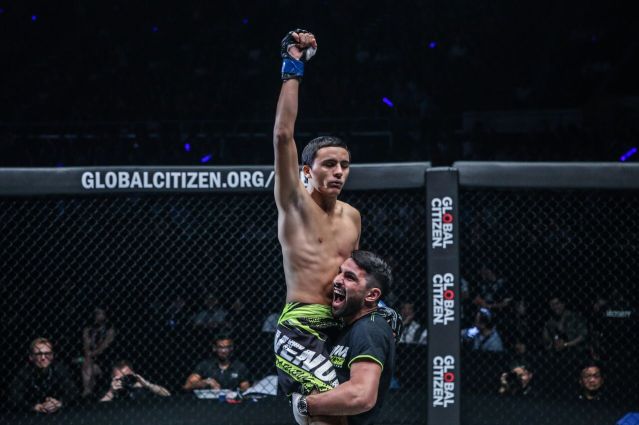 Alaverdi “Dagger” Ramazanov, 23, has earned his second victory in ONE Championship’s striking-only league ONE Super Series. Originally from Russia, he is training out of Venum Training Camp in Pattaya, Thailand, where he is currently based.

Ramazanov is a three-time International Federation of Muaythai Amateur Champion. He made his debut in ONE Super Series at “ONE: Kingdom of Heroes” at the Impact Arena in Bangkok, Thailand on October 6, 2018.

At “ONE: Kingdom of Heroes,” Ramanazov faced Petchmorrakot Wor. Sangprapai, 24, of Bangkok in a Muay Thai bout in the bantamweight division. After three three-minute rounds, the bout was left in the hands of the judges and in the end, referee Atsushi Onari rased the hand of the Venum Training Camp fighter, who was declared the winner via unanimous decision.

On November 9, 2018, Ramanazov competed in ONE Super Series for the second time. He faced Andrew Miller, 28, of Scotland, United Kingdom at “ONE: Heart of the Lion” at the Singapore Indoor Stadium in Kallang, Singapore.

In the first bout in the main card of “ONE: Heart of the Lion,” Ramanazov and Miller competed in a Muay Thai contest in the bantamweight division. Onari put a stop to the contest at 0:57 of the first round when the Pattaya-based Russian martial artist knocked out his Scottish opponent.

Originally, it was Yodlekpet “T-Ded 99” Or.Pitisak, 23, of Bangkok who was scheduled to face Miller at “ONE: Heart of the Lion.” The Thai fighter was pulled out of the card and was replaced by Ramazanov.

While “ONE: Kingdom of Heroes” marked Ramazanov’s second bout in ONE Super Series, it was the first bout of Miller in ONE Championship’s striking-only league. The Russian martial artist was with his fellow Venum Training Camp fighter Mehdi “Diamond Heart” Zatout, 35, of France.

Zatout made his ONE Super Series debut on June 27, 2018 at “ONE: Spirit of a Warrior” at the Thuwunna Indoor Stadium in Yangon, Myanmar. He lost to Tukkatatong Petpayathai, 30, of Bangkok via unanimous decision in a kickboxing catch weight of 67 kg.

Meanwhile, watch all the “ONE: Heart of the Lion” bouts here: