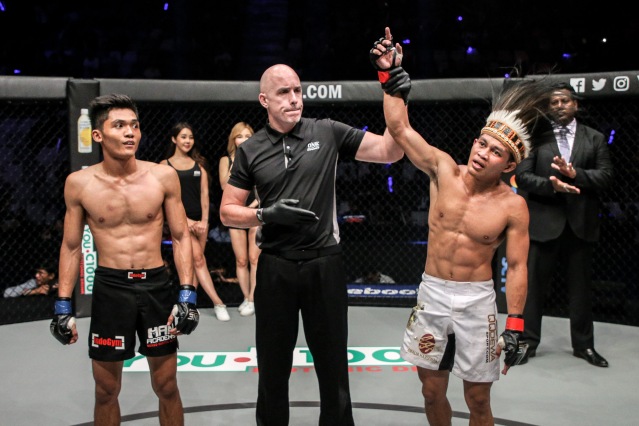 Representing Tigershark Fighting Academy, Adrian “Papua Badboy” Mattheis, 25, of Jakarta, Indonesia has earned his seventh victory in ONE Championship. He was one of the winners at “ONE: Warrior’s Dream,” which marked his 11th bout in the Singapore-based martial arts organization.

Featuring three ONE Super Series striking contests and 11 mixed martial arts matches, “ONE: Warrior’s Dream” took place  at the Stadium Istora in Jakarta on November 17, 2018. In the fourth bout of the evening, Mattheis competed in an MMA bout in the strawweight division against Aziz “The Krauser” Calim, 21, of Surakarta, Central Java, Indonesia.

Calim is of Filipino and Indonesian descent. Representing Han Academy, he made his ONE Championship debut at “ONE: Warrior’s Dream.”

Mattheis sent the crowd into a frenzy with a submission victory over Calim. The former looked to trade hands early on, with the latter opting to use his grappling.

In the second round, Mattheis saw an opportunity to pull guard on a standing guillotine. Moments later, the Tigershark Fighting Academy fighter forced the tap.

Referee Olivier Coste put a stop to the strawweight bout between Matheis and Calim after 57 seconds in the second round. Matheis was declared the winner guillotine choke submission.

Winning at “ONE: Warrior’s Dream” improved Matheis’s professional MMA record to 7 wins and 4 losses. On the other hand, Calim now has 4 wins and 3 losses.

On August 26, 2016, Mattheis made his ONE Championship debut at the preliminary fight night of “ONE: Titles and Titans.” He had his first two wins in the organization by knocking out his fellow Indonesian fighters Rustam Hutajulu and Roso Nugroho.

Both  Phat “Ice” Soda, 29, of Cambodia and Eddey “The Clown” Kalai, 36, of Sabah, Malaysia lost to Mattheis via rear-naked choke submission. Mattheis defeated Soda at “ONE: Total Victory” on September 16, 2017 and Kalai at “ONE: Global Superheroes” on January 26, 2018.

On April 20, 2018, Mattheis defeated Lan Ming Qiang, 24, of China via unanimous decision at “ONE: Heroes of Honor.” On September 22, 2018, the former knocked out his fellow Indonesian fighter Angelo “The Unicorn King” Bimoadji, 21, via strikes at “ONE: Conquest of Heroes.”