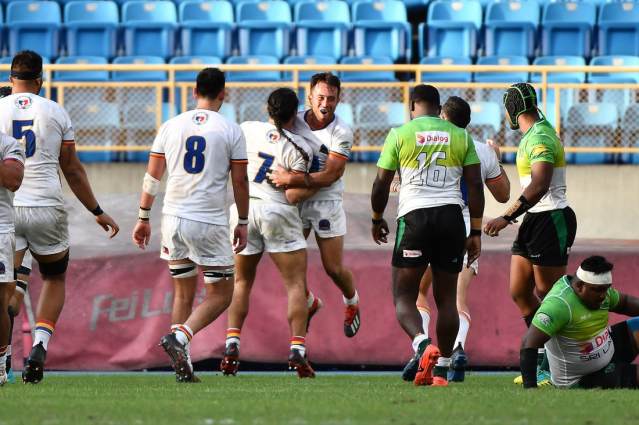 The Philippine Volcanoes stepped up to the challenge on May 29, 2019 at the Taipei Municipal Stadium in Taipei, Taiwan. Backed by MVP Sports Foundation and the Philippine Sports Commission, the Philippine national rugby union team defeated the Sri Lanka Tuskers, the top ranked team in the Division 1 Asia Rugby Championships.

Early in the first half, the Volcanoes pounced after star center Robert Luceno Fogerty found the try line in the first minute of play. The Tuskers capitalized soon after through a penalty goal to Samuel Mduwantha but Team Captain Danny Bembo Matthews returned fire with a successful penalty conversion of his own making 8 to 3.

For the next 25 minutes, each nation went toe-to-toe for possession and territory. It was not until the 34th minute where Sri Lanka first took their first lead of the match scoring off a driving maul making it 10 points to 8 with six minutes to play in the first half.

Soon after a dominant run from Edlen Cortez Hernandez broke the Sri Lankan defense with Tim Alonso Berry provided quick skills to score on debut right before the bell to give the Philippines the lead moving into the half time break. Matthews successfully added the two extra points with the Philippines up after 40 minutes of play 15 to 10.

The start of the second half started exactly the same as the first, the Philippines playing positive running rugby with consistent play. Fogerty once again capitalized on quick ball scoring a double making it 20 to 10 two minutes into the second half.

From here on in, the Volcanoes never looked like slowing down. Back-to-back points with Ned Plarizan Stephenson and Justin Villazor Coveney both scoring 5 pointers with Matthews adding the extras.

Up 36 points to 10, the Volcanoes earned themselves a comfortable scoreline ahead. To their credit, a never give in attitude had the Sri Lankans score two late tries however in between a penalty conversion to Matthews had the score out of reach, making it 39 to 22 after 80 minutes of play.

“Really proud of the team,” Matthews said. “The forwards especially dug deep and were clinical which allowed the backs to get clean ball and play attacking rugby. It was a real team effort.”

“Credit to Sri Lanka who can score tries from anywhere,” Matthews continued. “We just needed to hold out until the final whistle. The team showed a lot of maturity and composure to finish the game as winners.”

The Volcanoes have set a rematch in the grand final against Singapore as Singapore defeated host nation Chinese Taipei 18 to 13. The Philippine team will be looking to defend their title as 2018 champions and look to build on their momentum from last nights victory.

“Singapore have a strong forward pack and can be explosive in the backs,” Matthews noted. “But it’s important as a team we focus on ourselves and improvements we can make from Wednesday’s game. It’s important that we step up from last night’s performance and improve yet again.”

The grand final will be played on June 1, 2019 at 7:00 pm at Taipei Municipality Stadium. Here is a clip from the final training of the Philippine Volcanoes prior to the grand final: