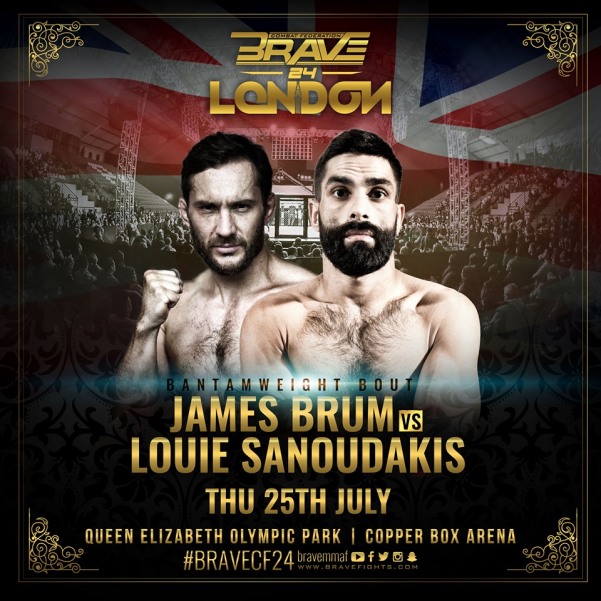 Canada and England were represented at “Brave 24: London” at the Copper Box Arena in Queen Elizabeth Olympic Park in London, England on July 25, 2019. It was the first Brave Combat Federation event to take place in England.

An invite-only event attended by VIP guests, “Brave 24: London” featured seven professional mixed martial arts bouts. In the third bout of the evening, Louie “Leonidas” Sanoudakis, 30, of Canada and James “Job Done” Brum, 32, and England battled it out in the bantamweight division.

After three five-minute rounds, the bantamweight bout was left in the hands of the judges. In the end, the referee raised the hand of Sanoudakis, who was declared the winner via unanimous decision.

Winning at “Brave 24: London” improved the professional MMA record of Sanoudakis to 8 wins and 1 loss. On the other hand, Brum now has 18 wins and 6 losses.

Sanoudakis solely represented Canada at “Brave 24: London.” It was his second outing in Brave CF.

Brum made his Brave CF debut at “Brave 24: London.” He was one of the four fighters who represented England.

Including Canada and England, 11 countries were represented at “Brave 24: London.” The others were Bahrain, Brazil, Ireland, Lebanon, Northern Ireland, Poland, Russia, the United States and Wales.