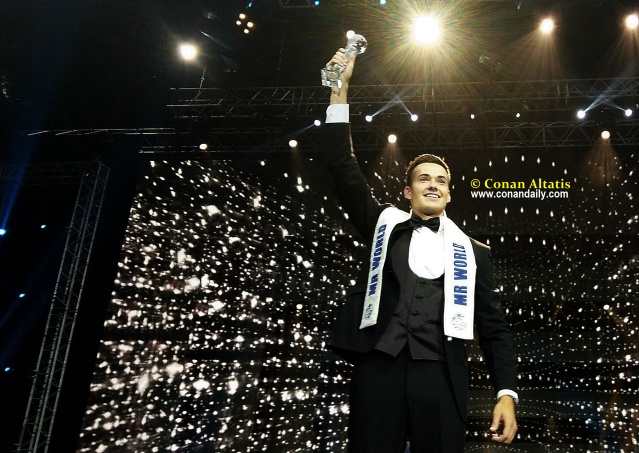 On August 23, 2019, Mr. World 2016 Rohit Khandelwal, 29, of India crowned former rocket scientist Jack Heslewood, 27, of England as his successor at the Mr. World 2019 coronation night at the Araneta Coliseum in Quezon City, Metro Manila, Philippines. The ceremony was hosted by Miss World 2013 Megan Young, 29, and her boyfriend Mikael Daez, 29.

Runner-up to Heslewood was Fezile Mkhize, 28, of South Africa while Brian Faugier, 25, of Mexico was second runner-up. Carlos Franco, 27, of Brazil and Alejandro Martinez, 26, of Dominican Republic made it to the Top 5.

Before winning the Mr. World 2019 title, Heslewood performed well in the fast track events. He made it to the Top 5 of both the Top Model challenge and the Talent and Creativity contest.

Heslewood has an IQ of 181. He is the first Mr. World from England.

Mr. World 2019 is the 10th edition of the male international beauty pageant, marking the first time it was held in the Philippines. Heslewood bested 71 other candidates from around the world.

Hailing from Hertfordshire, England, Heslewood speaks English, basic French and Bahasa. He was 21 years old when he earned his degree in Aerospace Engineer from Kingston University in Kingston upon Thames, London, England.

Passionate about music and technology, the Hertfordshire native is a talented drummer and a former rocket scientist for Marshall Aerospace and Defence Group at the Cambridge International Airport in Cambridgeshire, England. He also enjoys skiing and competing in triathlons.

Crowned Mr. World England 2019 in February 2019, Heslewood succeeded Christopher Bramell, 25, of Liverpool, England. The latter made it to the Top 5 in Mr. World 2016 in Southport, England.

In 2018, Heslewood represented England in Manhunt International in Gold Coast, Australia. He finished in the Top 15.

In 2013, Heslewood’s sister Kirsty Heslewood, 30, represented England in Miss World 2013 in Bali, Indonesia. She finished in the Top 10.