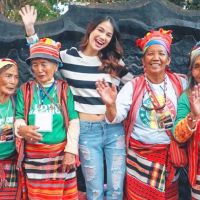 In an attempt to do fashion and philanthropy in a single event, ABS-CBN Ball 2019 took place at the Shangri-La at the Fort in Taguig City, Metro Manila, Philippines on September 14, 2019 for the benefit of the social welfare program Bantay Bata 163. But “The General’s Daughter” star Angel Locsin, 34, chose not to attend the gathering of ABS-CBN artists.

Locsin took to Instagram to explain why she skipped the event, which was formerly known as the Star Magic Ball. She said she donated to Bantay Bata 163 the amount that she was supposed to spend in the event.

I salute my friends at the ABS-CBN Ball who are doing their share to promote awareness on children’s rights and to help the beneficiaries of Bantay Bata 163 get the education that everyone deserves. As for me, I decided to do my share in a way that I could probably be more of use. I think it would be better for me to donate directly to Bantay Bata the amount that I’m supposed to spend in the ball. It’s not much, but will help make a difference to someone else’s life. For those who would like to help a child to have a bright future, please donate to Bantay Bata 163. #abscbnball2019

Founded by the late environmentalist and philanthropist Gina Lopez on February 14,1997, Bantay Bata 163 is a program of ABS-CBN Foundation that helps disadvantaged and at-risk children in the Philippines. The number in its name is a national emergency hotline that lets people to report incidents of child abuse, exploitation and neglect.

While Locsin preferred not to attend the ABS-CBN Ball 2019, she met with her friends Bea Alonzo, 31, Angelica Panganiban, 32, and Anne Curtis, 34, at the after-party. The four actresses said goodbye to glamorous dresses and makeup and enjoyed some drinks.

Locsin plays Rhian Bonifacio on “The General’s Daughter” on ABS-CBN. Meanwhile, here is an interview with the actress: