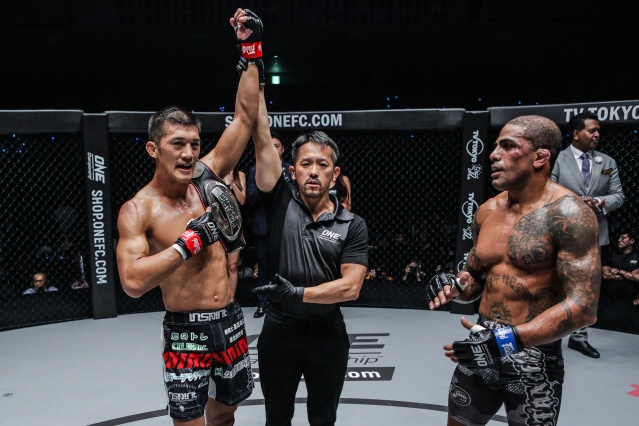 Featuring mixed martial arts, Muay Thai and kickboxing matches, “ONE: Century 世紀” took place at the Ryogoku Kokugikan in Tokyo on October 12, 2019. In the third bout of the second part, Silva and Sato competed in an MMA bout in the bantamweight division.

Motohiro Tsuruwa served as the referee. In the first round, Silva was relentless in his attempt to bring the action to the ground but Sato was able to defend well.

In the next round, Sato popped out of a takedown attempt and landed barrage of knees and punches to finish Silva off and score the first stoppage win of the night. Tsuruwa put a stop to the bantamweight contest after 4 minutes and 30 seconds in the second round.

Sato trains out of Sakaguchi Dojo and Fight Base Toritsudai. He now holds a professional MMA record of 34 wins, 16 losses and 3 draws.

Including Brazil and Japan, 18 countries were represented in the two parts of “ONE: Century 世紀.” The others were Algeria, Belarus, China, France, India, Indonesia, Italy, Japan, Malaysia, Myanmar, the Philippines, Singapore, South Korea, Taiwan, Thailand, Turkey and the United States.