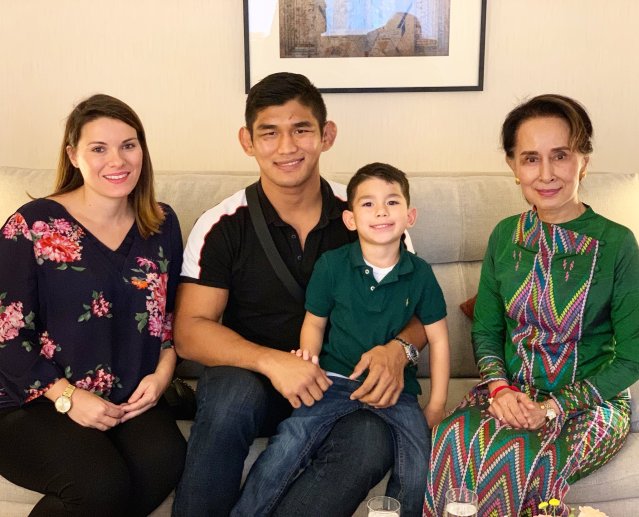 It was La N Sang’s 12th ONE Championship bout and first title defense as the reigning ONE Light Heavyweight World Champion. Winning at “ONE: Century 世紀” improved his professional mixed martial arts record to 26 wins, 10 losses, 0 draw and 1 No Contest.

After “ONE: Century 世紀,” La N Sang personally met with Suu Kyi. He was with his wife Katherine Oliphant and their son Aung De.

La N Sang is currently based in Baltimore, Maryland, United States. He graduated from Andrews University in Berrien Springs, Michigan, USA with a bachelor’s degree in Agricultural Science in 2007.

A Kachin MMA fighter born in Myitkyina, Myanmar on May 21, 1985, La N Sang attended International School Yangon in Bahan Township, Yangon, Myanmar. He moved to the U.S. in 2004.

My family got a pleasant surprise to meet the State Counselor 🇲🇲, Aung San Suu Kyi. She congratulated me on my @ONEChampionship match. My family loves her and she inspires me to be a better person. Thank you Aunty Suu, this has been the highlight of my Japan 🇯🇵 trip. pic.twitter.com/BQ2QhiDngh

Suu Kyi was born on June 19, 1945 in Yangon, which was then Rangoon of British Burma. Her father Aung San, who allied with the Japanese during the World War II, founded the modern Burmese army and negotiated Burma’s independence from the United Kingdom in 1947.

Yangon used to be the capital of Myanmar. But in 2006, the military government relocated the administrative functions to Nay Pyi Taw, the purpose-built city located at the center of the Nay Pyi Taw Union Territory.

On October 18, 2019, Suu Kyi attended an event that marked the second anniversary of the Union Enterprise for Humanitarian Assistance, Resettlement and Development (UEHRD) in Rakhine State in Nay Pyi Taw. During the event, she talked about the conflict in Rakhine State.

“Relying on ourselves is the best way when facing challenges, I’ve made up my mind on  this,” Myanmar Times quoted Myanmar’s de facto leader as saying. “We appreciate our friends for providing help and I respect them but we as people have to rely on ourselves eventually. I want to raise such a spirit and make it firm in our union.”

Meanwhile, here is the First State Counsellor of Myanmar in a recent visit to Charles University in Prague, Czech Republic:

6 tips to go through a will dispute