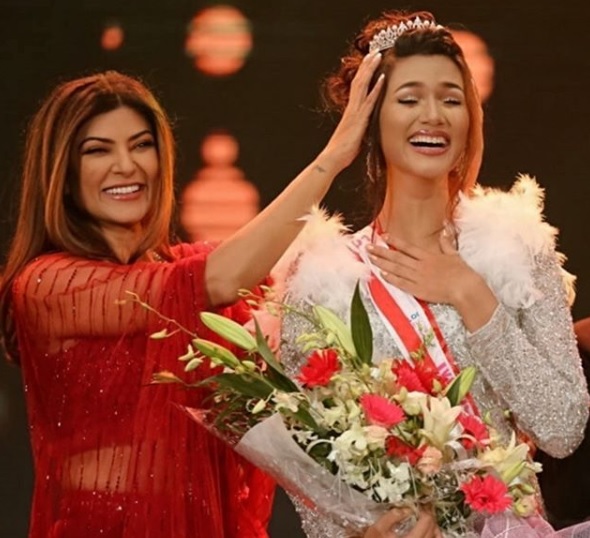 Miss Universe 1994 Sushmita Sen, 43, of India was very happy to be part of a historic event in Bangladesh recently. She crowned the first ever Miss Universe Bangladesh Shirin Akter Shela.

Sen knows that joy of being a beauty queen making history very well. She is the first ever Miss India to win Miss Universe.

Rizwan Bin Farooq is the Miss Universe Bangladesh chairman. The Miss Universe 2019 coronation night will be held in South Korea on December 5, 2019, Prothomalo quoted him as saying.

From 12,000 applicants, the chosen candidates underwent a three-month bootcamp. On October 15, 2019, the Miss Universe Bangladesh crown was unveiled in a gala event held in the Amisheé Fine Jewelry store in Gulshan, Dhaka, Dhaka Tribune reported.

Shela is a Physics student at the University of Dhaka. She previously won Face of Bangladesh 2019.

The first woman to represent Bangladesh in Miss Universe is a soldier’s daughter. She is expected to compete against more than 80 candidates from all over the world.

Catriona Gray, 25, of the Philippines is the reigning Miss Universe 2018. She is the fourth Miss Universe from her country and the 67th woman to hold the title.

It was in the Philippines where Sen was crowned Miss Universe 1994. Here is a clip she shared from the Miss Universe Bangladesh 2019 coronation night:

#missuniversebangladesh2019 #dhaka ❤️👏😁🎵 What a night!!! The Beautiful Shirin Akter Shela will be the FIRST EVER Bangladeshi to represent her country at the Miss Universe competition later this year!!👏😍 Having the priviledge to Crown her, will always remain special, as along with her, we all became a celebrated part & a chapter of Bangladesh’s history!!🙏❤️ Congratulations Shirin, May you always speak from your heart…in whichever language!!!😊😍💋My gratitude & love to team MUB, to all the superbly gifted contestants, the gracious panel of Judges & the loving people of #bangladesh 🙏🤗❤️😁 #duggadugga To new beginnings!! 💃🏻 I love you guys!!!💋 Stunning outfit #designer @avvantikaasparwani 😍👏💋 makeup #Mahinder Hair #fatima ❤️ #myteam 💃🏻