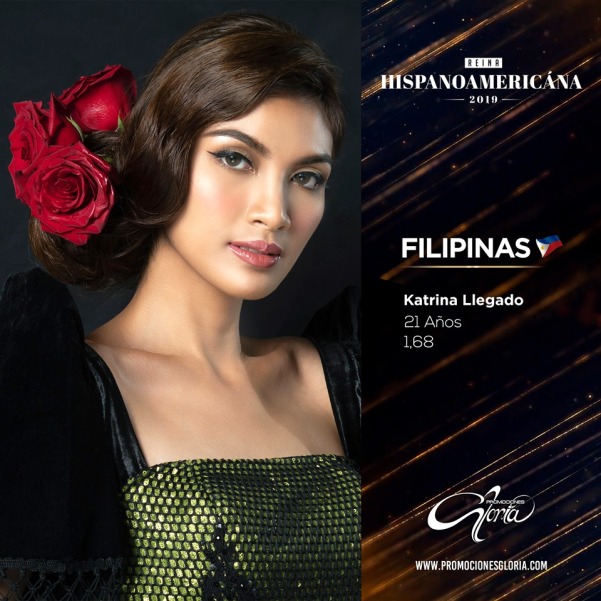 Katrina Llegado, 21, of Philippines was one of the Reina Hispanoamericana 2019 winners. She was the fifth runner-up of the 29th edition of the international beauty pageant based in Bolivia.

Including Llegado, Claro, Peredo and Vilela, 30 candidates competed for the crown. On February 4, 2020, the Colombian candidate was voted Miss Personalidad UDABOL by the Universidad de Aquino Bolivia (UDABOL) in Santa Cruz de la Sierra, Bolivia with Aylin Jaldin, 25, of Chile as the second placer.

A post shared by Reina Hispanoamericana (@rhispanaoficial) on Feb 6, 2020 at 6:16am PST

Yuanilie Alvarado, 23, of Puerto Rico, Ketlin Lotterman, 25, of Paraguay and Valeria Badell, 22, of Venezuela were the respective second, third and fourth runners-up. The respective sixth, seventh, eighth and ninth runners-up were Ainara Cardano, 25, of Spain, Franchesca Astier, 21, of Dominican Republic, Cassandra Cherry, 24, of Haiti and Monserrat Baez, 19, of the United States.

Reina Hispanoamericana has been celebrating Hispanic heritage since 1991. Had Llegado won, she would have been the second winner from the Philippines following Teresita Marquez, who was crowned in 2017.

Hola! Your Reina Hispanoamericana Filipinas wishes everyone a Merry Christmas and a Happy New Year ❤️ Please check out the video to see my message for everyone! @rhispanaoficial @pgloriaoficial @msworldphil Special thanks to @dommoreno_ and @klpotente for this video.