7 Junk Terror Bill protesters arrested in Cebu, Philippines for violating Bayanihan to Heal as One Act? 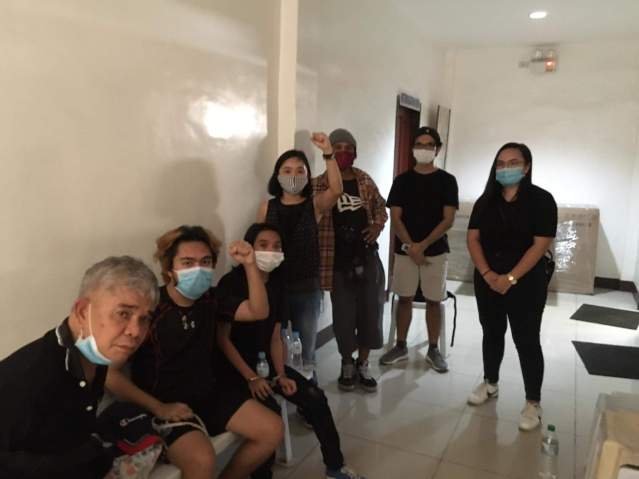 Arresting the participants of a recent Junk Terror Bill protest is proving the point they are trying to make. The protest took place in the University of the Philippines Cebu in Cebu City, Philippines on June 5, 2020.

Kneeling in solidarity with the Black Lives Matter protests in the United States, the protesters had just stood up when they were dispersed by the university’s security guards accompanied by policemen. The law enforcement officers were heavily armed, according to the university’s student publication Tug-Ani, as cited by Bulatlat.

One of the protesters was UP alumnus Al Ingking. The others were Jaime Paglinawan of Bagong Alyansang Makabayan-Central Visayas, Joahanna Veloso of National Union of Students of the Philippines, Bern Cañedo of Youth Act Now Against Tyranny Cebu, Nar Porlas of Anakbayan UP Cebu, Janry Ubal from Food Not Bombs Cebu and Dyan Gumanao of Kabataan Partylist and Aninaw Productions.

Gumanao is also a Cebu correspondent for Altermidya Network, which is now demanding her immediate release. Now collectively known as the Cebu 7, she and the other six protesters are currently detained in Camp Sotero Cabahug in Cebu City.

The Cebu 7 protesters were reportedly accused of violating Republic Act No. 11469, also known as the Bayanihan to Heal as One Act. Charges have yet to be filed against them.

The Bayanihan to Heal as One Act authorizes Philippines’ president Rodrigo Duterte to “exercise powers necessary to carry out urgent measures to meet the current national emergency” related to the new coronavirus (COVID-19), allowing him to implement temporary emergency measures based on the World Health Organization (WHO) guidelines to prevent the spread of the virus. It became effective on March 25, 2020 and will last for three months only unless the House of the Representatives extend it.

Protesters scurry to shelter in UP Cebu. The Soto-Enrile accord bars police officers from automatically entering UP campuses. #JunkTerrorBill #ResistAsOne pic.twitter.com/YExqY8tCJM

On June 3, 2020, the Congress approved House Bill No. 6875 also known as the Anti-Terrorism Act of 2020 on third and final reading. Duterte wanted the bill to be passed immediately “to address the urgent need to strengthen the law on anti-terrorism in order to adequately and effectively contain the menace of terrorist acts for the preservation of national security and the promotion of general welfare,” the Philippine New Agency quoted him as saying.

Junk Terror Bill is a campaign against the Anti-Terrorism Act of 2020. Among those who are supporting the petition are Miss Universe 2015 Pia Wurtzbach and Miss Universe 2018 Catriona Gray.

I've been overwhelmed with emotion lately and I've been struggling to put it into words.. I may not always have the right words to say but I can't deny how this makes me feel. One thing I know for sure is I want to keep learning. I want to keep growing. And I want to see and be part of a change. Stop hate, injustice and racism. #BlackOutTuesday #JunkTerrorBill

There is so much happening in the world and in our nation right now, and I know alot of us want to just tune out because it all gets a bit overwhelming. But please, dont allow that to be the reason we revert into silence and turn a blind eye. We need to stay engaged because this is where our voices count. So let's help each other by creating spaces that help us keep each other informed and help us understand what's going on. I've taken the time to research and digest information and come to my own conclusions and I implore you all to do the same. I've created an IG story highlight with some resources. I'm not here to influence you to think a certain way, but I hope I can influence you to think for yourself. #JunkTerrorBill