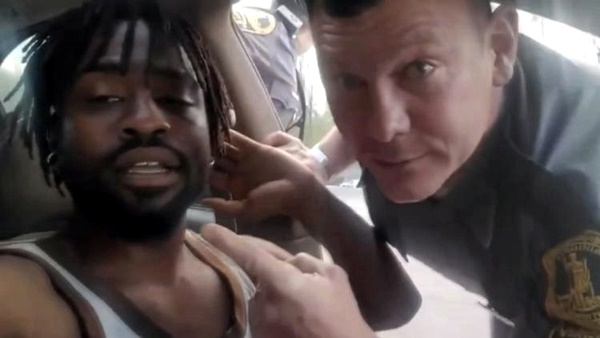 At around 4:15 p.m. on April 20, 2019, Thompson was stopped for an expired inspection decal while he was traveling north on Interstate 495 at the 51 mile marker in Fairfax County, Virginia. Hewitt and his fellow Virginia State Troopers conducted a search of Thompson’s vehicle and one of them believed there was a strong odor of marijuana in it.

“Brother, how do you think this is going to end?” Hewitt responded to Thompson when the latter said he believed his detention and the search were illegal. “Are you ready to go through all of this today just for that? There’s probably not even any weed in here.”

Thompson filmed the interaction with his cellphone placed on his dashboard. At one point, Hewitt looked at the cellphone camera and said, “This is going to be posted on YouTube.”

“This is going to get posted, after all of this, and I guarantee,” Hewitt continued. “Look at this. Everybody who is going to see this, I guarantee, they are going to say, you Sir, you got the coolest cop in the whole nation, the most coolest, calmest, collected cop because I ain’t even trying to be here to do that you, man, and all the comments, there’s going to be two thousand comments saying, ‘You, what a dumbass.'”

With a chokehold, Hewitt pulled Thompson out of his car. The African-American man was later on treated for an abrasion to his forehead at the Fairfax County Adult Detention Center where he was taken into custody.

The video of the encounter surfaced on social media on July 13, 2020. In a statement obtained by WTOP News, Virginia State Police superintendent Colonel Gary T. Settle said the conduct Hewitt displayed during the course of the traffic stop is neither “in agreement with the established standards of conduct required of a Virginia trooper” nor “characteristic of the service provided daily across the Commonwealth of Virginia by Virginia State Police personnel.”

Today, we sent a letter to @MarkHerringVA about Virginia State Trooper Charles Hewitt.

In April 2019, Derrick Thompson was driving to work when Hewitt terrorized and assaulted him. pic.twitter.com/YTSCeDLM9j