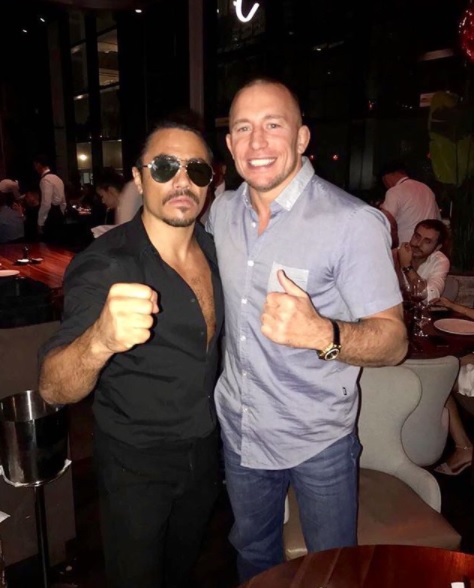 It has been almost a year since Turkish chef Nusret Gökçe, 34, became an internet sensation because of a viral video of him suavely cutting mean and sprinkling salt, which earned him the nickname Salt Bae. He caught the attention of several celebrities, the latest of which is former UFC Middleweight Champion Georges “Rush” St-Pierre, 36.

On Dec. 24, Sunday, St-Pierre took to Instagram to share a photo of himself and Salt Bae. In the caption, the Canadian MMA fighter thanked the chef of Kurdish descent for “the amazing steak.”

On Dec. 2, St-Pierre took to Facebook to announce that he has been diagnosed with ulcerative colitis, an inflammatory bowel disease (IBD). In a recent study of 78 people with IBD, which was published in Nutrition Journal, 72 percent of the respondents improved their symptoms by restricting foods such as fast food, alcohol, dairy products and processed meat.

On Nov. 4, St-Pierre ended his four-year hiatus and dethroned then-UFC Middleweight Champion Michael Bisping, 38. But for the Canadian fighter, his health is his number one priority so he vacated the title.

Recently, Bisping talked about St-Pierre on his “Believe You Me” podcast. The former described the latter as “a prick.”

For Bisping, St-Pierre’s decision to vacate the UFC Middleweight Champion title is “a bitch move.” On the other hand, Bisping is happy that nobody in the middleweight division will ever defeat St-Pierre.

Bisping explained that if it will have a negative impact on him if St-Pierre loses to another middleweight fighter. The former pointed out that “there’s pluses and negatives.”

Meanwhile, here is a viral video of Salt Bae: