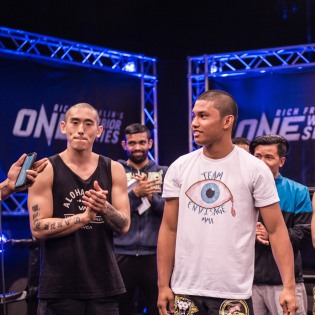 09 April 2018 – Singapore: The finale of “Rich Franklin’s ONE Warrior Series” Season 1 was concluded on March 31, 2018 in Singapore. After an exciting evening filled with thrilling bouts showcasing promising young talents, Filipino prospect Rockie Bactol and South Korean prospects Kim Woonkyum and Park Daesong each received a $100,000 worth ONE Championship contract as overall winners of the reality documentary series.

Kim is a South Korean prospect who went through a troubled childhood after his parents got divorced at a young age but after discovering martial arts, he was able to change his circumstances and now leads a life of discipline and honor. In the “Rich Franklin’s ONE Warrior Series” Season 1 finale, he faced Sanjidul Islam, winning by first-round technical knockout.

Also a South Korean prospect, Park was initially passed on by the ONE Warrior Series judges in the January 2018 tryouts although he was impressive, but he was selected as a late filler to compete against Eto Kimihiro, who was deemed one of the top contestants. In their bout, Park overcame two illegal blows below the belt and an eye poke to take victory in the first round by technical knockout.

“While Rockie Bactol and Woonkyum Kim were both prospects in which I see promise, we initially passed on Daesong Park in the tryout process only for him to come back and blow us all away with his indomitable spirit,” ONE Warrior Series CEO Rich Franklin stated. His co-host Jonathan Fong added that their goal was “to highlight Asia’s most promising young talent” and to prove to the world that in Asia, “martial arts is more than just a sport” because it is a “lifestyle.”

In addition, athletes Shahid Siddiqui, JD Hardwick, and Faizan Khan were recognized for their incredible performances, in which they displayed unbreakable will and perseverance through adversity. They each received a Warrior Bonus, a cash award of variable amount.