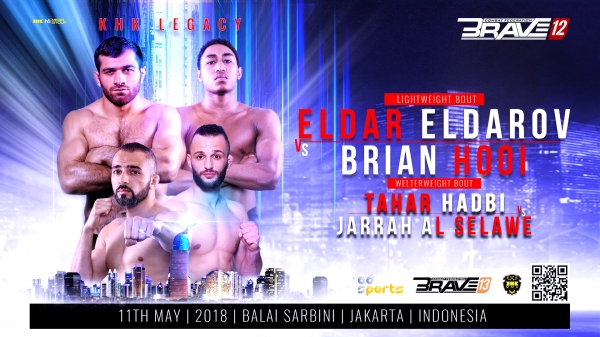 Brave Combat Federation has announced the fight card for “Brave 12: KHK Legacy,” which will take place at the Balai Sarbini Hall in Jakarta, Indonesia on May 11, 2018. This is the first event of the Bahrain-based mixed martial arts promotion to be held in the country marking its entry to Southeast Asia.

The fight card features athletes from 16 nations competing in seven weight categories. The main event showcases the lightweight bout between Eldar Eldarov and Brian Hooi. The co-main event features the brewing rivalry between Tahar Hadbi and Jarrah Al Selawe in the welterweight division.

Hamza Kooheji will face Khalid Taha, a recently signed prospect from Rizin Fighting Federation. Both Kooheji and Taha will be moving up the weight category to the featherweight division.

Marat Magomedov will be making his Brave CF debut when he faces Luke Adams in a featherweight bout. Dagestani fighter Gadzhimusa Gaziev will face Leonardo Mafra in a catchweight matchup opening the main fight card.

Brave CF has announced the subsequent event after “Brave 12: KHK Legacy.” The 13th event of the promotion will take place at The SSE Arena in Belfast, Northern Ireland on June 9, 2018.

The fight night will be broadcasted live on Abu Dhabi TV, Combate and StarSat in respective regions. In the remaining territories, the fights can be accessed over Brave Fights.