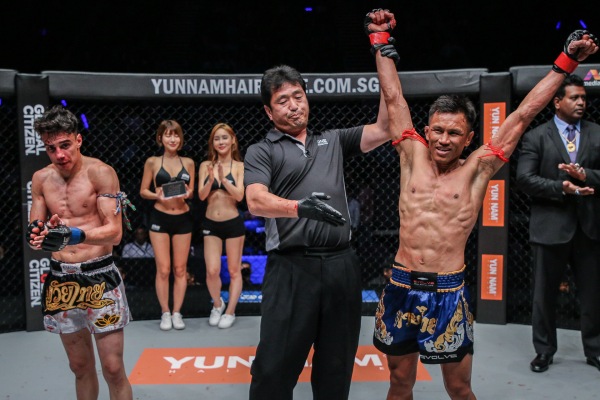 On May 18, 2018, ONE Championship was in its home country Singapore for “ONE: Unstoppable Dreams,” which featured both mixed martial arts and ONE Super Series bouts. The fourth bout of the evening was a Muay Thai match between Singtongnoi Por Telakun of Thailand and Joseph “Hurricane” Lasiri of Italy.

Singtongnoi and Lasiri competed in the 61.2 kg division with Atsushi Onari as the referee. Their match was the first ONE Super Series bout of the evening.

“ONE: Unstoppable Dreams” marked Singtongnoi’s first bout in ONE Championship. It was a successful promotion debut for the Thai martial artist as he defeated his Italian opponent via technical knockout in the second round.

The second bout on the ONE Super Series card was a kickboxing contest between Yodsanklai Fairtex of Thailand and Chris Ngimbi of Congo in the 72.5 kg division.

Three belts were at stake at “ONE: Unstoppable Dreams,” which took place at the Singapore Indoor Stadium, Kallang, Singapore. There were two co-main events prior to the main event.

In the first co-main event, Martin “The Situ-Asian” Nguyen of Australia and Vietnam successfully defended his ONE Featherweight World Champion title from Christian “The Warrior” Lee of Singapore. The Vietnamese-Australian champion won via split decision.

In the second co-main event, Sam-a Gaiyanghadao of Thailand and Sergio Wielzen of the Netherlands competed for the inaugural ONE Super Series Flyweight Muay Thai World Championship. The Thai martial arts veteran won via knockout in the second round.

In the main event, Angela “Unstoppable” Lee of Singapore defended her ONE Women’s Atomweight World Champion title from Mei “V.V.” Yamaguchi of Japan in a rematch. The Singaporean champion kept the title and her undefeated record by defeating her Japanese challenger via unanimous decision.

Here is a “ONE: Unstoppable Dreams” recap by Michael Schiavello and Mitch Chilson:

8 ways you can lose your nursing license