Loren Mack explains why ONE Championship included boxing in its menu 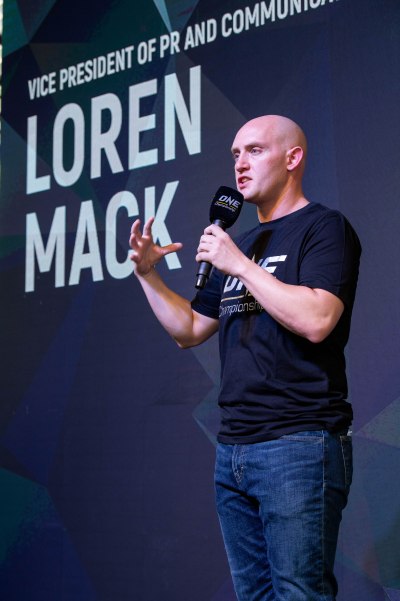 ONE Championship breathes a new life into Asian boxing as the sport’s popularity in the region is slowly ebbing due to several factors. This is according to Loren Mack, the promotion’s Vice President for Public Relations and Communications.

“Boxing is waning down in Asia,” Mack pointed out. “ONE Championship is the guiding light of every discipline under the umbrella of martial arts in the world, including boxing.”

Considered as the frontrunner of martial arts in the world, ONE Championship is set to return to Thailand on October 6, 2018 to stage another blockbuster event in the bustling city of Bangkok.

In just seven short years, it has evolved from a start-up mixed martial arts promotion to what it is now, hosting other different styles of martial arts such as Muay Thai, kickboxing, submission grappling and Lethwei, among others.

“We did it for mixed martial arts,” Mack declared. “We brought back Muay Thai and kickboxing into the limelight, so why not boxing?”

ONE Championship adds another different flavor to its fifth trip to Bangkok at the event titled “ONE: Kingdom of Heroes.” The card will be headlined by an intriguing 12-round world boxing championship contest between Srisaket Sor Rungvisai, 31, of Thailand and Iran “MagnifiKO” Diaz, 28, of Mexico.

Sor Rungvisai will put his World Boxing Council Super Flyweight World Championship on the line against Diaz at “ONE: Kingdom of Heroes,” which will take place at the Impact Arena in Bangkok. The Thai champ will have the opportunity to compete in his hometown.

Regarded as the world’s undisputed premier martial arts organization, ONE Championship made an epic announcement of entering into the sport of boxing in July 2018. The organization formed a partnership with Nakornloung Promotion (NKL) to co-promote the next world title defense of Sor Rungvisai.

ONE Championship has taken martial arts in Asia into greater heights, broadcasting to over 1.7-billion potential viewers across 138 countries around the world. Since its inaugural card in September 2011, it has staged nearly 80 live events and has visited 11 different countries, including the United Arab Emirates, China, Chinese Taipei, the Philippines, Myanmar and Cambodia.

The biggest local and global brands in the world have been attracted to ONE Championship with its highly active fanbase that is engaged in both digital and social media platforms. Forming a number of key partnerships, the organization is at pace for a billion dollar valuation and an initial public offering in the next couple of years.