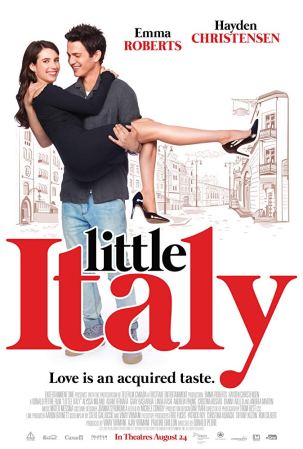 Written by Vinay Virmani and directed by Donald Petrie, “Little Italy” is a romantic comedy starring Hayden Christensen opposite Emma Roberts. Learn more about the story and the music of the movie here:

A young couple must navigate a blossoming romance, amidst a war between their families’ competing pizza restaurants.

1999. Best friends SAL and VINCE pool their talents and secret family recipes to give Little Italy its most storied pizza. One day a terrible fight breaks out between the two. No one knows why. But Little Italy is never the same again and neither is its pizza. A wall now runs between the once fabled pizzeria. PIZZA NAPOLI is now divided into VINCE’S PIZZA – THE BEST and SAL’S PIZZA – IT’S BETTER.

Present day. Nothing has changed. Sal and Vince spend more time trying to sabotage one another’s shops than focus on their own business. But not everyone wants war. Love blossoms in little Italy’s cobblestoned piazzas between Sal’s daughter NIKKI and Vince’s son LEO. Nikki is now a Cordon Bleu chef freshly returned from London. She and Leo, a pizza chef who dreams of owning his own organic pizza place, rekindle their childhood crush right under their oblivious fathers’ eyes. Sal and Vince’s wives DORA and AMALIA are secretly best friends, but have to keep up the charade for their squabbling husbands’ sake. To complicate matters further, Sal’s mother FRANCA and Vince’s father CARLO are also carrying on a clandestine romance!

When Franca and Carlo announce their wedding plans to their shocked sons, Nikki and Leo’s secret romance slips out in the open as well. A shocked Sal and Vince decide Little Italy is too small for the two of them. A wager is laid. “Team Sal” will face “Team Vince” in a pizza cookout and the loser will leave Little Italy for good. Sal and Vince succeed in pitting their children against each other, so Nikki and Leo are now also bitter rivals.

Tempers are raging hotter than wood fired pizza ovens. Who will the winner be? Team Sal or Team Vince? And what of the couples? Will their love become the victim or emerge victorious in this ridiculously epic food feud?

The “Little Italy” soundtrack features the Shawn Mendes monster hit “There’s Nothing Holdin’ Me Back,” which has recorded over half a billion hits on YouTube to date. The song appears at a pivotal point in the relationship between the romantic leads played by Emma and Hayden, and audiences are sure to love watching this chartbuster filmed on two well-known Hollywood movie stars.

Mateo Messina is a Hollywood based composer who has scored music for over 50 feature films and 150 television episodes. He’s best known for movies like “Up in the Air,” “August: Osage County” and “Juno,” for which he won the Grammy in 2007, and the recently released comedy “Blockers.” For “Little Italy,” Mateo has chosen to blend classic Italian favorites with contemporary scores, resulting in a soundtrack that is both deliciously original and memorable.