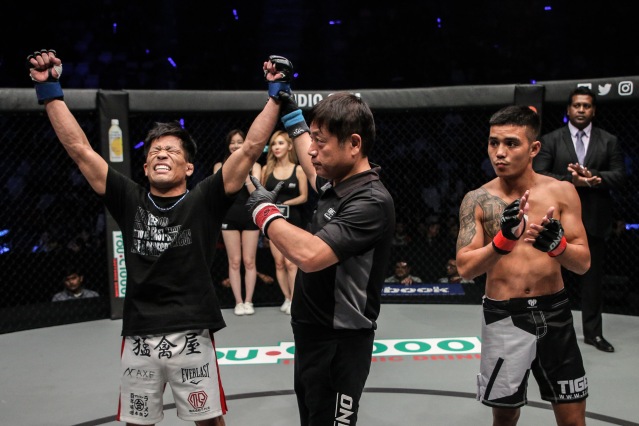 Fighting out of Ibaraki, Japan, Hayato Suzuki, 32, has earned his fourth victory in ONE Championship. He is training out of Brave Gym, which is located in Kita Senju, Adachi-ku, Tokyo, Japan.

Suzuki was one of the winners at “ONE: Warrior’s Dream,” which featured three ONE Super Series striking contests and 11 mixed martial arts matches. It marked the Brave Gym fighter’s fifth bout in ONE Championship.

“ONE: Warrior’s Dream” took place on November 17, 2018 at the Stadium Istora in Jakarta, Indonesia. In the 11th bout of the evening, Suzuki competed in an MMA bout in the strawweight division against Pongsiri “The Smiling Assassin” Mitsatit, 22, of Chiang Mai, Thailand.

The Japanese grappling ace put on a ground-game clinic. He dispatched his Thai opponent via submission in the first round.

After scoring on an early takedown, Suzuki imposed his will on the ground, looking to finish off Mitsatit with the Passion Lock, a method used by Joshua “The Passion” Pacio, 23, of Baguio City, Philippines when he submitted the Thai fighter at “ONE: Reign of Kings” on July 27, 2018. Pacio is now the reigning ONE Strawweight World Champion.

With Mitsatit being able to defend the first submission attempt, Suzuki transitioned into a rear naked choke and forced the tap. Referee Yuji Shimada put a stop to the contest after 2 minutes and 9 seconds in the first round.

All of Suzuki’s four victories in ONE Championship came by rear-naked choke submission. When he made his promotional debut at “ONE: Kings and Conquerors” on August 5, 2017, he defeated Pacio in the first round.

On January 26, 2018, Suzuki earned his second ONE Championship victory  at “ONE: Global Superheroes” where he defeated Yago “Codorninha” Bryan, 26, of Rio de Janeiro, Brazil. The Japanese fighter defeated Robin “The Ilonggo” Catalan, 28, of Iloilo City, Iloilo, Philippines at “ONE: Kingdom of Heroes” on October 6, 2018.