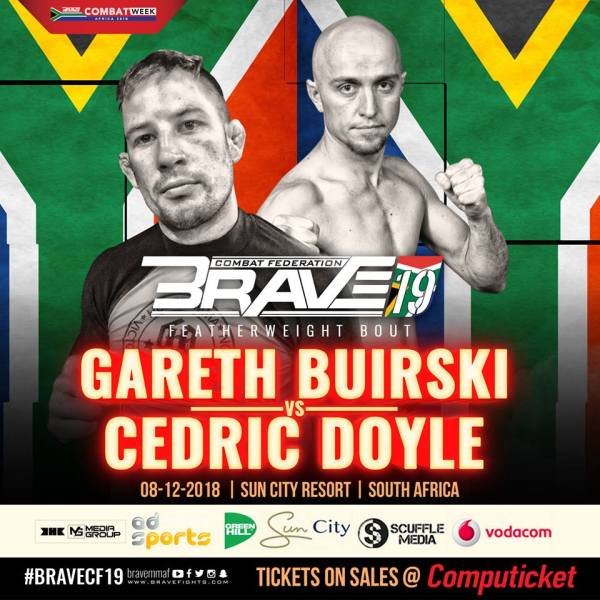 Along with 10 other countries, South Africa was represented at “Brave 19: South Africa,” the first ever international mixed martial arts events in the country. Bahrain-based MMA promotion Brave Combat Federation held the historic event at the Sun City Resort in North West, South Africa on December 8, 2018.

It was a rematch between Doyle and Buirski. During their first encounter, which was at “EFC Worldwide 46” on December 12, 2015, the fighter from Mpumalanga won via unanimous decision.

Buirski is training out of Team CIT MMA under the tutelage of Morne Visser. He made his Brave CF debut at “Brave 19: South Africa,” which marked his 15th professional MMA bout.

The Gauteng native previously competed in the Extreme Fighting Championship Worldwide. He was coming out of a split decision loss to Philippe “Le Terrible” Rouch, 24, of France at “EFC Worldwide 86” on August 19, 2017.

Competing professionally since 2012, Doyle was coming out of a knockout victory over his fellow South African fighter Trezequet “2Pac” Kanyinda at “EFC Worldwide 71” on June 23, 2018. It was a successful comeback for Doyle who went on a two-year break following a successful brain surgery.

Doyle and Buirski competed in the featherweight division at “Brave 19: South Africa.” The latter was able to seek revenge during the rematch.

The referee put a stop to the featherweight bout between Doyle and Buirski in the first round. The fighter from Gauteng submitted his opponent from Mpulanga via guillotine choke.

Winning at “Brave 19: South Africa” improved Buirski’s professional MMA record to 9 wins and 6 losses. On the other hand, Doyle now has 9 wins, 4 losses and 1 draw.

In the co-main event of the evening, Frans “The Black Mamba” Mlambo, 27, of Dublin, Ireland and Dansheel “Mamu” Moodley, 26, of Durban, Kwazulu-Natal, South Africa competed in the bantamweight division. The Irish contender submitted his South African opponent in the first round.