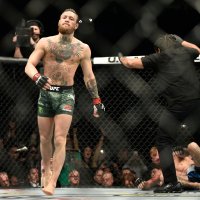 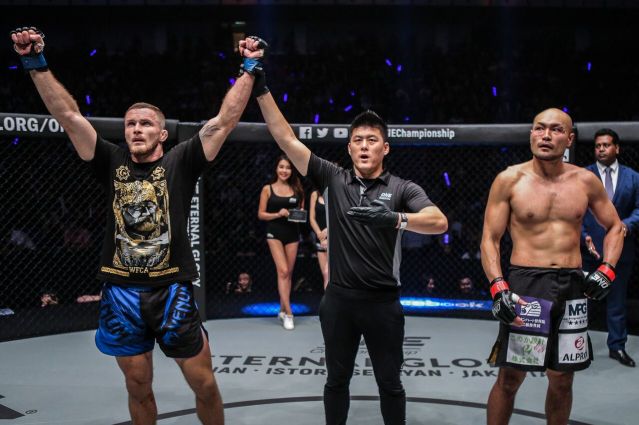 Representing Akhmat Fight Team, former ONE Middleweight World ChampionVitaly Bigdash, 34, of Rostov-on-Don, Rostov, Russia has earned his third victory in ONE Championship. He was one of the winners at “ONE: Destiny of Champions” on December 7, 2018 at the Axiata Arena in Kuala Lumpur, Malaysia.

Featuring seven mixed martial arts matches and four Muay Thai contests, “ONE: Destiny of Champions” was the last ONE Championship event in 2018. In the seventh bout of the evening, Bigdash faced Yuki “Yu-King” Niimura, 36, of Saitama, Japan in an MMA bout in the middleweight division.

Bigdash ended the year on a triumphant note by toppling Niimura via first-round submission. After a solid exchange of offense for the majority of the first round, the Russian contender was able to trap the Japanese ONE Championship debutante in a bad position, catching the arm and the head in a reverse triangle.

Referee Kemp Cheng put a stop to the middleweight bout after 4 minutes and 24 seconds in the first round. From a dominant position, Bigdash compelled Niimura to wave the white flag.

In the end, Cheng raised the hand of Bigdash, who was declared the winner via submission via reverse triangle shoulder lock. It was the fifth time the Akhmat Fight Team athlete won a professional MMA bout via submission.

Winning at “ONE: Destiny of Champions” improved Bigdash’s professional MMA record to 10 wins and 2 losses. On the other hand, Niimura now has 12 wins and 5 losses.

When Bigdash made his ONE Championship debut on October 9, 2015 at “ONE: Tigers of Asia” in Kuala Lumpur Malaysia, he challenged then reigning ONE Middleweight World Champion Igor “Lionheart” Svirid, 32, of Almaty, Kazakhstan. The Russian challenger captured the belt by knocking out the Kazakh defending champion via knee and punches.

On January 14, 2017, Bigdash successfully defended his title at “ONE: Quest for Power” by defeating “The Burmese Python” Aung La N Sang, 33, of Myitkyina, Kachin, Myanmar via unanimous decision. On June 30, 2017, they had their rematch at “ONE: Light of a Nation” at the Thuwunna Indoor Stadium in Yangon, Myanmar where the Burmese challenger won via unanimous decision.

On May 12, 2018, Bigdash suffered his second loss in ONE Championship. He was knocked out via punches by Leandro “Leo” Ataides, 32, of Rio de Janeiro, Brazil at “ONE: Grit and Glory” at the Jakarta Convention Center in Jakarta, Indonesia.

For more photos from the bout between Bigdash and Niimura, visit Top Sports Asia. Meanwhile, watch all the “ONE: Destiny of Heroes” bouts here:

Check the complete “ONE: Destiny of Champions” results here.