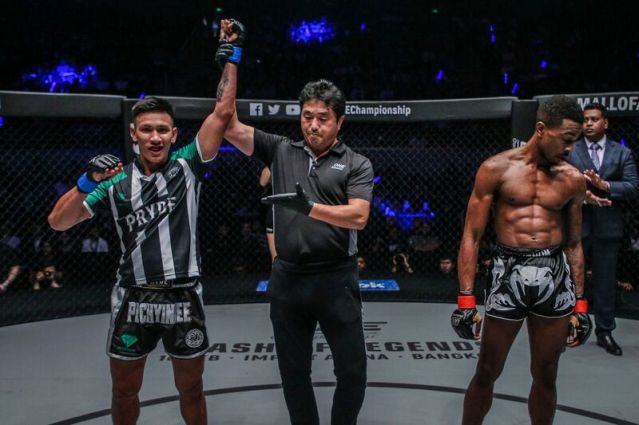 Fighting out of Thailand, Bangpleenoi Petchyindee Academy, 25, was one of the winners at “ONE: Hero’s Ascent.” It marked his debut in ONE Championship’s striking-only league ONE Super Series.

Featuring one kickboxing contest, four Muay Thai matches and nine mixed martial arts bouts, “ONE: Hero’s Ascent” took place at the SM Mall of Asia Arena in Pasay City, Metro Manila, Philippines. In the fifth bout of the evening, Bangpleenoi faced Brown Pinas, 26, of the Netherlands in a Muay Thai bout in the featherweight division.

Bangpleenoi controlled the pace of the match as he punished Pinas with a relentless barrage of punches and kicks. The Thai martial artist scored a knockdown midway through the third round to seal the deal and earn his first win on the ONE Championship stage.

After three three-minute rounds, the Muay Thai contest between Bangpleenoi and Pinas was left in the hands of the judges. In the end, referee Atsushi Onari raised the hand of the Petchyindee Academy athlete, who was declared the winner via unanimous decision.

Winning at “ONE: Heros’ Ascent” improved Bangpleenoi’s professional record to 121 wins, 50 losses and 10 draws. On the other hand, Pinas now has 26 wins, 10 losses and 1 draw.

Born and raised in Samut Prakan, Bangpleenoi started training in Muay Thai even before he started school. He was only five years old when his father took him to the 96 Penang Gym in Klong Toey, Bangkok, Thailand to train.

Aside from Thailand, the Netherlands and the Philippines, 11 other countries were represented at “ONE: Hero’s Ascent” namely Algeria, Australia, Brazil, China, India, Indonesia, Japan, Malaysia, South Korea, Tunisia and the United States. Like Bangpleenoi, Rodtang “The Iron Man” Jitmuangnon, 21, also represented Thailand.