Andy Souwer vs Jo Nattawut at ONE Featherweight Kickboxing World Grand Prix at ‘ONE: Enter the Dragon’ in Singapore 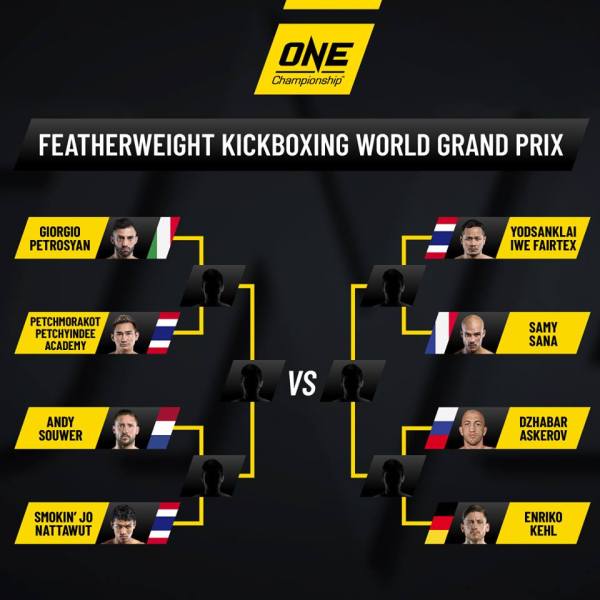 Andy “The Destroyer” Souwer, 35, of the Netherlands and “Smokin’” Jo Nattawut, 29, of Thailand will battle it out at “ONE: Enter the Dragon.” It will be one of the four bouts in the quarter-finals of ONE Featherweight Kickboxing World Grand Prix.

ONE Championship will hold “ONE: Enter the Dragon” at the Singapore Indoor Stadium in Kallang, Singapore on May 17, 2019. It is the promotion’s second event in 2019 to take place in the country.

“ONE: Enter the Dragon” marks Souwer’s second outing in ONE Super Series. It will be Nattawut’s fifth bout in ONE Championship’s striking-only league.

Souwer currently holds a professional kickboxing record of 160 wins, 21 losses and 1 draw. On the other hand, Nattawut has 69 wins, 7 losses and 2 draws.

All of the four bouts in the ONE Featherweight Kickboxing World Grand Prix quarter-finals will take place at “ONE: Enter the Dragon.” The other contenders are Giorgio “The Doctor” Petrosyan, 33, of Italy, Petchmorrakot Petchyindee Academy, 26, of Thailand, Yodsanklai “The Hero” IWE Fairtex, 33, of Thailand, Samy “AK47” Sana, 30, of France, Dzhabar Askerov, 33, of Russia and Enriko “The Hurricane” Kehl, 27, of Germany.

In the main event, Christian “The Warrior” Lee, 20, of Singapore will challenge reigning ONE Lightweight World Champion  Shinya “Tobikan Judan” Aoki, 35, of Japan. In the co-main event, Nieky “The Natural” Holzken, 34, of the Netherlands and Regian “The Immortal” Eersel, 25, of the Netherlands will compete for the inaugural ONE Super Series Lightweight Kickboxing World Championship title.

“Super” Sage Northcutt, 23, of the United States will make his ONE Championship debut at “ONE: Enter the Dragon.” He will face Cosmo “Good Boy” Alexandre, 36, of Brazil in the welterweight division.

Also in the “ONE: Enter the Dragon” card are Ariel “Tarzan” Sexton, 36, of Costa Rica and Saygid “Dagi” Guseyn Arslanaliev, 23, of Turkey. They will compete in the semi-finals of ONE Lightweight World Grand Prix.

Here is a clip featuring Nattawut: