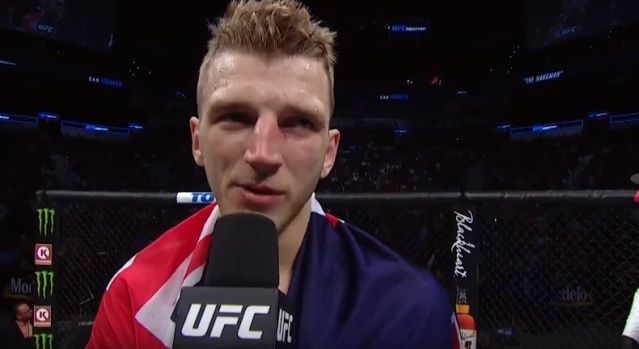 Fighting out of Auckland, New Zealand, Dan “The Hangman” Hooker, 29, was one of the winners at “UFC on ESPN 4.” It was his eighth victory in the Ultimate Fighting Championship.

The UFC held “UFC on ESPN 4” at the AT&T Center in San Antonio, Texas, United States on July 20, 2019. In the 10th bout of the evening, Hooker fought James “The Texecutioner” Vick, 32, of Temple Hills, Maryland, United States.

With Kerry Hatley as the referee, Hooker and Vick competed in the lightweight division. Hatley put a stop to the lightweight contest after 2 minutes and 33 seconds in the first round when the Kiwi mixed martial artist knocked out his American opponent via punches.

Winning at “UFC on ESPN 4” improved Hooker’s professional MMA record to 18 wins and 8 losses. On the other hand, Vick now has 13 wins and 4 losses.

Born in Auckland on February 13, 1990, Hooker is both an MMA fighter and a kickboxer. He currently holds a professional kickboxing record of 9 wins, 1 loss and 3 draws.

Hooker made his professional MMA debut in 2009. When he made his UFC debut on June 28, 2014 at “UFC Fight Night 43” in Auckland, he knocked out Ian “The Locksmith” Entwistle, 32, of Accrington, England.

Watch the interview with Hooker in the UFC octagon at “UFC on ESPN 4” here: