Thailand’s Rodlek PK.Saenchaimuaythaigym earns 2nd ONE Super Series win, beats Andrew Miller at ‘ONE: Dawn of Heroes’ in the Philippines 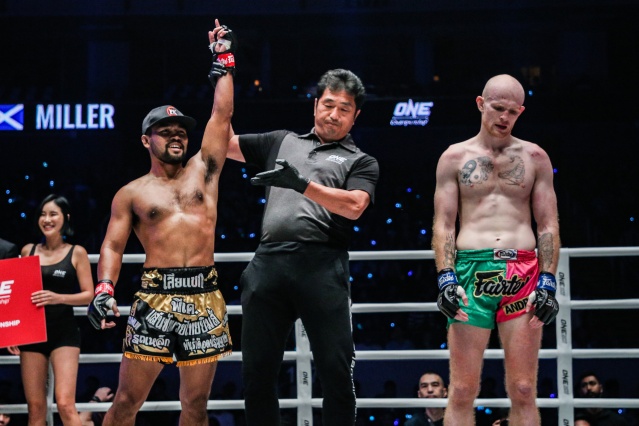 Thai martial artist Rodlek PK.Saenchaimuaythaigym, 29, was one of the winners at “ONE: Dawn of Heroes.” It was his second victory in ONE Championship’s striking-only league ONE Super Series.

Featuring 13 mixed martial arts matches and two Muay Thai matches, “ONE: Dawn of Heroes” took place at the SM Mall of Asia Arena in Pasay City, Metro Manila, Philippines. In the ninth bout of the evening, Rodlek faced Andrew “Maddog Fairtex” Miller, 28, of the United Kingdom in a Muay Thai match in the bantamweight division with Atsushi Onari as the referee.

Rodlek overcame Miller’s significant height and reach advantage as he outstruck his foe in the first two rounds of action. In the opening minute of the final round, the Thai contender dropped his Scottish opponent with a short right elbow followed by a knee.

Onari put a stop to the bantamweight contest after 49 seconds in the third round. Rodlek knocked out Miller via right cross.

Winning at “ONE: Dawn of Heroes” improved the professional Muay Thai record of Rodlek to 127 wins, 40 losses and 5 draw. On the other hand, Miller now has 34 wins, 18 losses and 2 draws.

Including the U.K. and Thailand, 12 countries were represented at “ONE: Dawn of Heroes.” The other countries were Australia, Brazil, China, Indonesia, Japan, Malaysia, the Philippines, South Korea, the United States and Vietnam.

“ONE: Dawn of Heroes” marked Rodlek’s second ONE Super Series bout. In his promotional debut, he defeated Liam “Hitman” Harrison, 33, of the U.K. via unanimous decision.

More photos of the bout between Rodlek and Miller are on Top Sports Asia. Here is a clip from the “ONE: Dawn of Heroes” press conference: