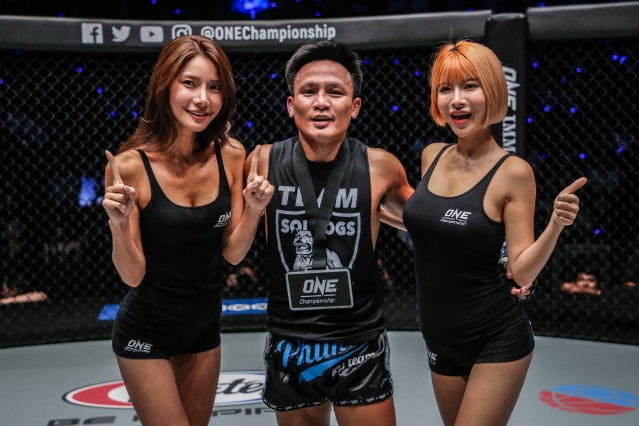 Lerdsila Phuket Top Team, 38, of Thailand was one of the winners at “ONE: Dreams of Gold.” It was the Thai martial artist’s fourth victory in ONE Championship’s striking-only league ONE Super Series.

Featuring mixed martial arts, kickboxing and Muay Thai, “ONE: Dreams of Gold” took place at the Impact Arena in Bangkok, Thailand on August 16, 2019. In the seventh bout of the evening, Lerdsila fought Savvas “The Baby Face Killer” Michael, 20, of Cyprus in a Muay Thai contest in the flyweight division.

Elias Dolaptsis served as the referee. Dom Lau was the cage announcer while Michael Schiavello and Mitch Chilson were the commentators.

Dolaptsis put a stop to the Muay Thai contest after 29 seconds in the second round when Lerdsila knocked out Michael. The Thai fighter was victorious by technical knockout after an arm injury rendered his Cypriot opponent unable to continue.

Winning at “ONE: Dreams of Gold” improved the professional Muay Thai record of Lerdsila to 190 wins, 31 losses and 5 draws. On the other hand, Michael now has 31 wins and 2 losses.

Including Cyprus and Thailand, 19 countries were represented at “ONE: Dreams of Gold.” The others were Brazil, Cambodia, China, Cuba,  France, India, Indonesia, Italy, Japan, the Netherlands, the Philippines, Russia, Serbia, South Korea, Vietnam, the United Kingdom and the United States.

Originally from Isan, Thailand, Lerdsila was 12 when he moved to Bangkok and he was 7 years old when his father started teaching him Muay Thai. He has been training out of Phuket Top Team in Phuket, Thailand since 2015.

“ONE: Dreams of Gold” marked Lerdsila’s fourth bout in ONE Super Series. He defeated Sok Thy, 20, of Cambodia twice in the league before defeating Kohei “Momotaro” Kodera, 28, of Japan and Michael.

More photos from the bout between Lerdsila and Michael are on Top Sports Asia. Watch the “ONE: Dreams of Gold” recap here: