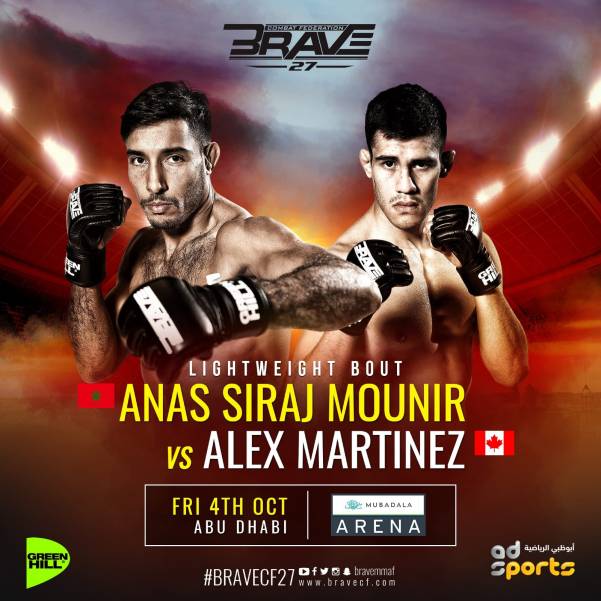 Anas “The Moroccan Sensation” Siraj Mounir, 33, of Morocco and Alex Martinez, 24, of Canada will battle it out in the Brave Combat Federation cage for the second time. A rematch between the two has been booked for the Bahrain-based mixed martial arts promotion’s 27th event.

Brave CF will hold “Brave 27” at the Mubadala Arena in Abu Dhabi, United Arab Emirates. One of the bouts is a lightweight bout between Mounir and Martinez.

Mounir was born in Morocco on March 1, 1986 and is currently based in Dubai, UAE. He has been competing professionally since 2013.

The Paraguayan-Canadian MMA fighter has been competing professionally since 2016. When he made his Brave CF debut on December 8, 2018 at “Brave 19” at the Sun City Resort in Sun City, South Africa, he submitted Hanru “The Bully” Botha, 26, of Bendore, Polokwane, South Africa via guillotine choke.

“Brave 27” marks Martinez’s third Brave CF outing. It will be Mounir’s third bout in the promotion, as well.

On December 22, 2018, Mounir made his Brave CF debut at “Brave 20” at the Gachibowli Indoor Stadium in Hyderabad, India. He defeated John “Trouble” Brewin, 24, of Auckland, New Zealand via unanimous decision.

On April 19, 2019, Mounir and Martinez battled it out in the lightweight division at “Brave 23: Pride and Honor,” which took place at the Martyr Rashid Al-Ziyoud Hall Boxing Arena in Amman, Jordan. The Paraguayan-Canadian contender went for a low kick in the first round.

Although accidental, the kick was illegal. Mounir was unable to continue so the bout was declared a No Contest.

Brave CF has yet to release the complete “Brave 27” fight card. Meanwhile, watch the bout between Mounir and Brewin at “Brave 20” here: