Brave Combat Federation’s return to Abu Dhabi, United Arab Emirates has a new and very explosive fight. Ikram Aliskerov, 26, of Makhachkala, Dagestan, Russia will return to middleweight to face Mohammad “The Latest” Fakhreddine, 35, of Beirut, Lebanon in what promises to be one of the best matchups of “Brave 27.” 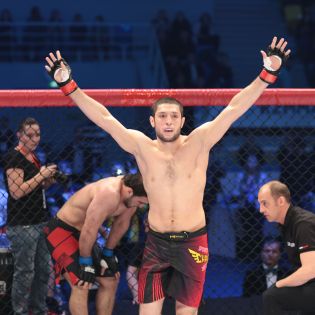 In 2018, Aliskerov defeated Chad “Superman” Hanekom, 28, of South Africa, Joey Berkenbosch, 36, of the Netherlands and Geraldo “Luan Santana” Coelho de Lima Neto, 28, of Brazil. The Dagestani athlete made his debut in the welterweight division when he faced Coelho.

On April 14, 2019, Aliskerov had his first loss as a professional MMA fighter. He was knocked out by undefeated fighter Khamzat “Borz” Chimaev, 25, of Sweden, who is of Chechen descent, at “Brave 23” at the Martyr Rashid Al-Ziyoud Hall Boxing Arena in Amman, Jordan.

“Brave 27” will Aliskerov’s seventh bout in Brave CF and Fakhreddine’s sixth outing in the promotion. The Lebanese contender is looking forward to redeem himself from his loss to Gadzhimusa “Deadshot” Gadzhiev, 27, of Makhachkala at “Brave 16” at the Mubadala Arena in Abu Dhabi, United Arab Emirates on September 21, 2018.

Born in Lebanon on July 20, 1984, Fakhreddine has been competing professionally since 2012. He was first slated to be the main event of Brave CF’s inaugural event before pulling out with an injury.

Fakhreddine’s Brave CF debut took place at “Brave 4” at the IPIC Arena in Abu Dhabi on March 31, 2017. He knocked out Vinicius Cruz, 29, of Brazil in the first ever event of the promotion in the capital of the UAE.

After the successful Brave CF debut, Fakhreddine was scheduled to fight for the promotion’s inaugural welterweight title but fell ill on the eve of weigh-ins and was replaced by eventual champion Carlston “Moçambique” Harris, 32, of Brazil. The Lebanese fighter moved on from the title picture by developing a rivalry with Tahar “Fast Hands” Hadbi, 32, of Algeria.

Hadbi and Fakhreddine fought in Brave CF twice. The first one ended in a No Contest while the second one was won by the Algerian-French contender via technical knockout.

Brave CF will hold “Brave 27” at the Mubadala Arena. It marks the third event of the Bahrain-based MMA promotion in Abu Dhabi.

Headlining “Brave 27” are eigning Brave CF Welterweight World Champion Abdoul “The Conqueror” Abdouraguimov, 23, of France and former titleholder Jarrah “The Jordanian Lion” Al-Selawe, 26, of Jordan. It is an immediate rematch after a close fight between both men at “Brave 23.”

More “Brave 27” bouts will be announced in the coming days as Brave CF gears up to give more international exposure to the local talents in the Middle East and North Africa region. Meanwhile, watch the bout between Aliskerov and Berkenbosch here: