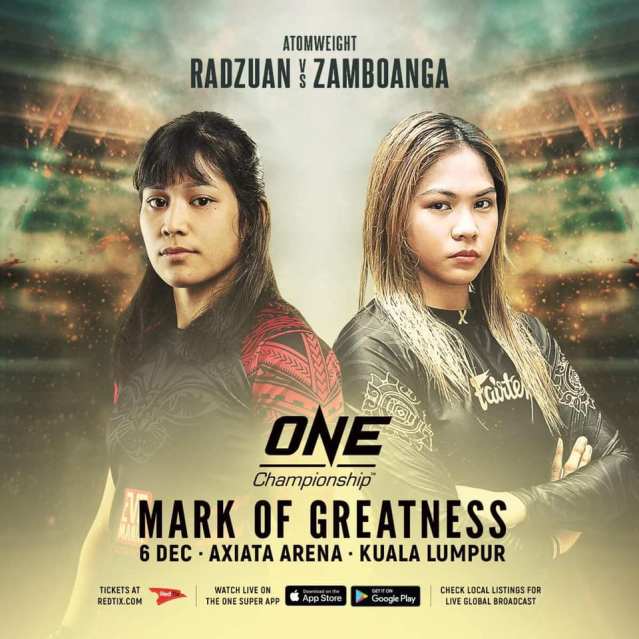 Training out of Fairtex Gym in Bangkok, Thailand, Denice “The Menace Fairtex” Zamboanga, 22, of the Philippines was one of the winners at “ONE: Mark of Greatness.” It was her first ONE Championship victory.

ONE Championship held “ONE: Mark of Greatness” at the Axiata Arena in Kuala Lumpur, Malaysia on December 6, 2019. She faced Wushu World Champion and former MIMMA Women’s Champion Jihin “Shadow Cat” Radzuan, 21, of Malaysia in a women’s atomweight contest.

Olivier Coste served as the referee. He issued a yellow card to both Radzuan and Zamboanga for lack of action.

After three five-minute rounds, the atomweight bout was left in the hands of the judges. In the end, Coste raised the hand of Zamboanga, who was declared the winner via unanimous decision.

Winning at “ONE: Mark of Greatness” improved the professional MMA record of Zamboanga to 6 wins and 0 loss. On the other hand, Radzuan now has 5 wins and 2 losses.

“ONE: Mark of Greatness” marks Zamboanga’s ONE Championship debut. The Filipino Fairtex Gym representative previously competed in the URCC Global.

Radzuan is one of the finest female martial artists to emerge from Malaysia, having competed in various disciplines such as Brazilian Jiu-Jitsu, wushu, kickboxing and boxing. She made her professional MMA debut in 2017 and since then, she has impressed with her well-rounded style.

After one bout in Ultimate Beatdown, Radzuan joined ONE Championship in 2018. She is training out of Ultimate MMA Academy in Johor Bahru, Malaysia.

Watch all the “ONE: Mark of Greatness” bouts here: