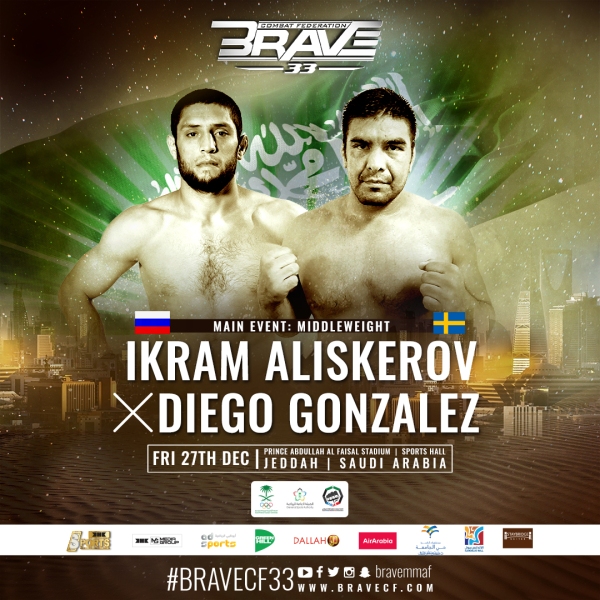 Ikram Aliskerov, 27, of Russia has been given an opportunity to prove that he is a force to be reckoned with in the middleweight division of BRAVE Combat Federation. He is set to face promotional debutante Diego “The Silencer” Gonzalez, 35, of Sweden at “BRAVE CF 33.”

Aliskerov looks to position himself again as a top contender in the middleweight division. On December 7, 2019, Daniel “Gaúcho” Souza Pereira, 28, of Curitiba, Parana, Brazil was crowned as the inaugural BRAVE CF Middleweight World Champion by knocking out of Chad “Superman” Hanekom, 27, of Sunninghill, South Africa to capture the inaugural title at “BRAVE CF 31” at the Sibaya Casino in Durban, South Africa.

BRAVE CF will hold “BRAVE CF 33” at the Prince Abdullah Al Faisal Stadium in Jeddah, Saudi Arabia on December 27, 2019. This will be the second event of of the Bahrain-based MMA promotion in the kingdom.

In Aliskerov’s latest fight, he competed in the welterweight division. He fought Khamzat “Borz” Chimaev, 25, of Sweden at “BRAVE CF 23” at the Martyr Rashid Al-Ziyoud Hall Boxing Arena in Amman, Jordan on April 19, 2019.

Chimaev knocked out Aliskerov at “BRAVE CF 23.” It was the Russian contender’s first ever loss as a professional MMA fighter while the Swedish fighter is still undefeated.

Before venturing into the welterweight division, Aliskerov was on the cusp of a title shot in the upper class, a place he hopes to regain with a win over Gonzalez. The latter trains out of Allstars Training Center in Stockholm, Sweden along with Chimaev, UFC fighters Alexander “The Mauler” Gustafsson, 32, of Sweden, Jimi “Poster Boy” Manuwa, 39, of England and Reza “Mad Dog” Madadi, 39, of Iran and Sweden,

Originally, Aliskerov was scheduled to fight Gonzalez at “BRAVE CF 14” at the Omnisports Indoor Club of Tangier in Tangier, Morocco on August 18, 2018. However, the Swedish fighter was forced to pull out due to undisclosed reasons.