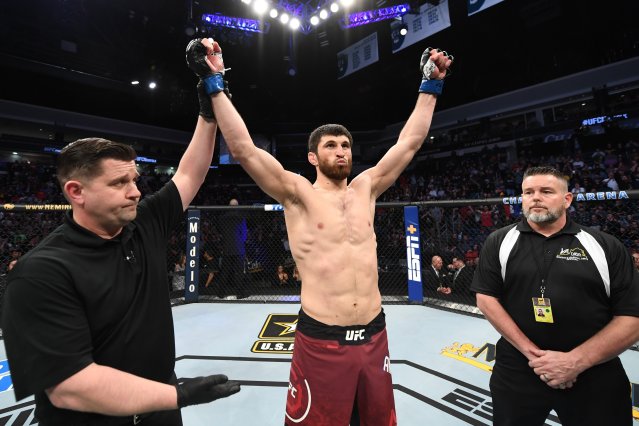 Ion “The Hulk” Cutelaba, 26, of Chisinau, Moldova lost to Magomed Ankalaev, 27, of Makhachkala, Dagestan, Russia at “UFC Fight Night 169” at the Chartway Arena in Norfolk, Virginia, United States on February 29, 2020. It was via technical knockout due to referee stoppage, which many mixed martial arts fighters, fans and experts did not agree with.

It was Cutelaba who was taking the offensive when the light heavyweight bout started. Early on, he landed body kicks but Ankalaev did not allow himself to be overwhelmed by the Moldovan contender’s aggressive striking by dodging and landing strikes of his own.

Ankalaev gave Cutelaba two punches that both connected and punctuated it with a left kick to the head of the latter. The Dagestani contender went on by punishing his Moldovan opponent with left kicks.

Cutelaba looked dazed but he kept throwing punches that did not connect while his eyes were wobbling. After 38 seconds in the first round, referee Kevin MacDonald put a stop to the light heavyweight contest.

But Cutelaba looked just fine as he aggressively protested as soon as MacDonald stopped the fight. The claim was that the Moldovan contender was just playing possum as part of his strategy.

The crowd who watched the fight was not pleased, as well. Several UFC fighters also took to Twitter to express their disagreement with the referee’s decision.

The referee called this one wrong!#ThisIsSucks

Watching the replay I believe he WAS playing possum. Every time he got touched he looked away and went extreme wobbly legs to draw his opponent in and then quickly snapped out of it firing a bomb! #UFCNorfolk

I disagree with that stoppage Cutelaba looked fine immediately after the stoppage, he immediately got his legs legs back after the ref stopped it, Bisping might be right he might’ve been baiting Ankalaev to rush him. At the very least it was too early. #UFCNorfolk

That was straight up stupid!! Knockout??? Are you fucking kidding me?!?! #UFCNorfolk OVERTURN!

The UFC has yet to release a statement whether or not the decision will be overturned. Until then, winning at “UFC Fight Night 169” improved the professional MMA record of Ankalaev to 13 wins and 1 loss.

On the other hand, Cutelaba downgraded to 15 wins, 5 losses and 1 No Contest. It was his eight bout in the UFC.

Nimic nu poate sta in calea succesului meu! Nothing can stay in front of my success! The Fight for love! @maisonjeffjeka

This marks Ankalaev’s fourth win in the UFC and it is his third knockout victory in the promotion. Here is what he thought about the controversial referee stoppage:

"I believe I hurt him. He was wobbling."@AnkalaevM gives her perspective on the odd ending to his fight with Ion Cutelaba. #UFCNorfolk pic.twitter.com/54LZFVyzbb