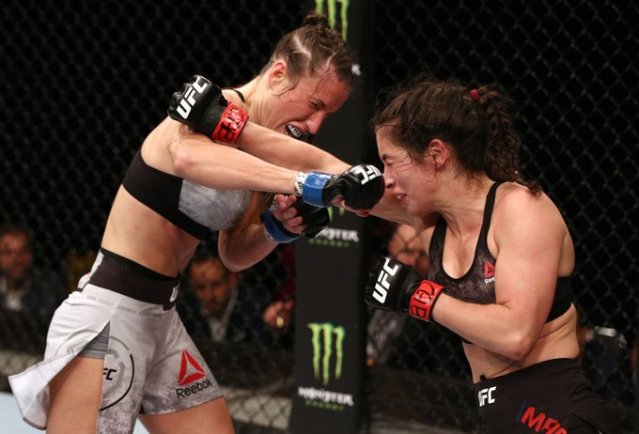 Bea “Bad News Barbie” Malecki, 28, of Stockholm, Sweden was one of the winners at “UFC Fight Night 170,” which was also called “UFC on ESPN+ 28.” It was the undefeated Swedish mixed martial artist’s second victory in the Ultimate Fighting Championship.

Featuring 12 MMA bouts, the UFC held “UFC Fight Night 170” at the Ginásio Nilson Nelson in Brasília, Brazil on March 14, 2020. In the first bout of the evening, Malecki competed in the women’s bantamweight division against Veronica Macedo, 24, Caracas, Venezuela.

Mike Beltran served as the referee. After three five-minute rounds, the bantamweight contest was left in the hands of the three judges, who all scored it 29-28.

In the end, Beltran raised the hand of Malecki. The Swedish MMA fighter was declared the winner via unanimous decision.

Losing to Malecki downgraded the professional MMA record of Macedo to 6 wins, 4 losses and 1 draw. It was the Venezuelan MMA fighter’s third loss in the UFC.

On the other hand, Malecki now has 4 wins and 0 loss. The first UFC opponent she defeated was Duda “Cowboyzinha” Santana, 23, of Rio de Janeiro, Brazil.

Including Brazil, Sweden and Venezuela, 12 countries were represented at “UFC Fight Night 170.” The others were Bosnia and Herzegovina, Canada, Czech Republic, Denmark, Mexico, Peru, Russia, Ukraine and the United States.

Macedo was the only representative of Venezuela. Malecki solely represented Sweden.

In the main event of the evening, Charles “Do Bronx” Oliveira, 30, of Guarua, Sao Paulo, Brazil submitted Kevin “The Motown Phenom” Lee, 27, of Grand Rapids, Michigan, USA via guillotine choke. They battled it out at a catch weight of 158.5 lbs with Mike Beltran as the referee.

Gilbert “Durinho” Burns, 33, of Niteroi, Rio de Janeiro, Brazil knocked out Demian Maia, 42, of Santana de Parnaiba, Sao Paulo via punches in a welterweight contest, which was the co-main event. Osiris Maia was the third man in the octagon.

"After the first round I was like, okay, let's go"@BeaMalecki talks about her unanimous decision victory at #UFCBrasilia pic.twitter.com/mOOfGAcOzI