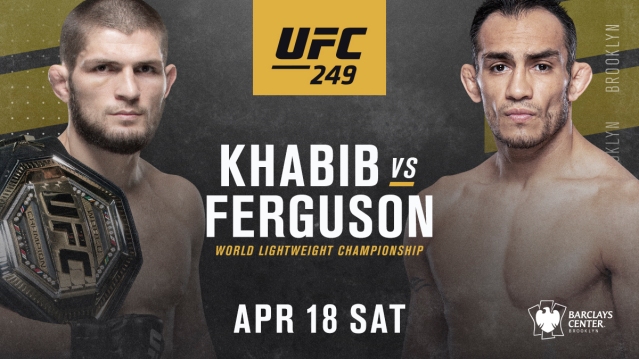 Belarus is seen as a possible host country of “UFC 249,” which will be headlined by reigning UFC Lightweight Champion Khabib “The Eagle” Nurmagomedov, 31, of Makhachkala, Dagestan, Russia and Tony “El Cucuy” Ferguson, 36, of Ventura, California, United States. Recently, UFC president Dana White confirmed once again that the event is happening despite the new coronavirus (COVID-19) pandemic.

Mixed martial arts fans from around the world will be really frustrated if “UFC 249” gets postponed as they have been waiting for the bout between Nurmagomedov and Ferguson to happen for years. If the UFC cancels it, it will be the fifth time the bout between them is scheduled but aborted.

“I’m gonna try and pull off Tony vs. Khabib on April 18 and try to get some normalcy back in this country,” White said in a recent episode of “Hotboxin’ with Mike Tyson.” “Every day that I work on this thing, I get another curve ball thrown at me.”

“Every time we plan something, it falls apart,” the UFC president told Mike Tyson. ” “I have to redo it, redo it so I have four or five locations right now and we’re getting this deal done and then we’re going to figure out who we can get in, who we can’t, what we can do and we’re going to build a card around it.”

“UFC 249” was originally set to take place at Barclays Center in Brooklyn, New York, United States on April 18, 2020. The UFC is doing its best to keep the date but the promotion has to look for a new venue to accommodate the event while almost every country now prohibits public gatherings due to the COVID-19 pandemic.

Currently, Ferguson is in the U.S. while Nurmagomedov is in Russia. Neither country can host “UFC 249” due to government restrictions caused by the COVID-19 pandemic.

But Belarus is giving MMA fans so much hope. It is one of the few countries that has yet to impose any restrictions to prevent the spread of deadly virus.

Why Belarus is chill

“It’s better to die standing than to live on your knees,” Belarus president Alexander Lukashenko said after taking part in an ice hockey game in Minsk, Belarus on March 28, 2020. When asked if there was anything that could stop him from playing hockey, he replied, “To stop me? But why? It is possible but why?”

“I don’t understand,” Lukashenko continued. “There are no viruses here. Did you see any of them flying around? I don’t see them, too.”

“This is a fridge,” the Belarusian leader said of the ice hockey arena. “It is the best for health. This is better than sport and this fridge is the a real anti-viral cure.”

So far, there have been 94 confirmed COVID-19 cases in Belarus with 32 recoveries and 0 death. The derby between FC Minsk and Dinamo Minsk took place at the FC Minsk Stadium in Minsk on March 28, 2020.

Meanwhile, White has yet to reveal the potential “UFC 249” venue. Watch Mike Tyson’s complete interview with the UFC president here: