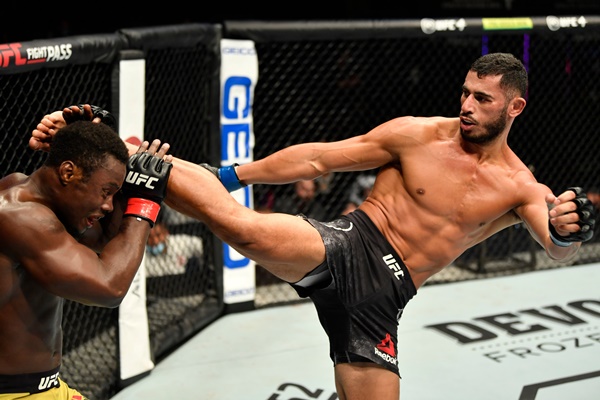 Mounir “Sniper” Lazzez, 32, made his successful Ultimate Fighting Championship debut at “UFC on ESPN 13.” The Tunisian-Emirati mixed martial artist fights out of Tunisia by way of the United Arab Emirates.

Daniel Movahedi served as the referee. After three five-minute rounds, the catchweight contest was left in the hands of the three judges.

Two judges scored it 30-27 while one judge saw it 29-18 all in favor of the fighter in the blue corner. In the end, Movahedi raised the hand of Lazzez, who was declared the winner via unanimous decision.

On the other hand, it was Alhassan’s second loss in the UFC. He now has 10 wins and 2 losses.

Lazzez solely represented both Tunisia and the UAE. Alhassan was one of the nine representatives of the U.S.

"I love to be the underdog and show my skill properly."@MLazzez enjoys dragging his opponent into deep waters and feels like the sky is the limit for him and his team.#UFCFightIsland1 | #InAbuDhabi | @VisitAbuDhabi pic.twitter.com/Sv2lIBXzdl