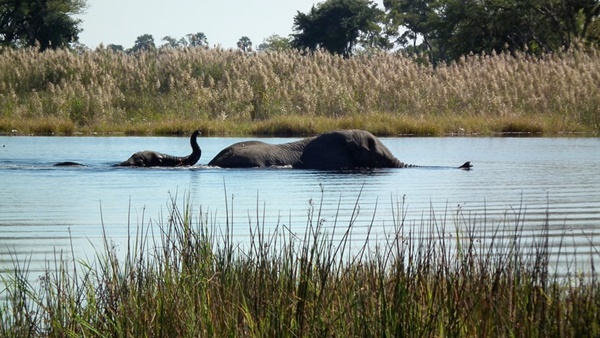 The deaths of more than 350 elephants in the Okavango Delta in Botswana from March 2020 to June 2020 perplexed experts. They found out on September 21, 2020 that cyanobacteria poisoning was the cause of the conservation disaster.

On February 11, 2013, the Okavango Delta was one of the Seven Natural Wonders of Africa officially declared in Arusha, Tanzania. On June 22, 2014, the delta became the 1000th site to be officially inscribed on the United Nations Educational, Scientific and Cultural Organization (UNESCO) World Heritage List.

According to Bostwana’s Department of Wildlife and National Parks deputy director Cyril Taolo, neither anthrax nor human involvement killed the elephants in the Okavango Delta. Their tusks were intact, which meant that they were not killed by poachers.

Blood tests conducted at specialist laboratories in Canada, South Africa, the United States consistently confirmed that the elephants died because of a species of cyanobacteria that produces neurotoxins and grows in pans or watering holes. The deaths stopped towards the end of June 2020, which coincided with the drying of pans, Science Alert quoted the Department of Wildlife and National Parks principal veterinary officer Mmadi Reuben is saying.

“The Ecology of Nostoc” authors Walker K. Dodds, Dolly A. Gudder and Dieter Mollenhauer defined cyanobacteria as a group of photosynthetic bacteria that live in a wide variety of moist soils and water either freely or in a symbiotic relationship with plants or lichen-forming fungi. According to them, some of the bacteria are nitrogen-fixing.

Cyanobacteria can be found in bare rock and soil, damp soil, temporarily moistened rocks in deserts, Antarctic rocks,  freshwater, oceans and in almost every terrestrial and aquatic habitat. The blooms of aquatic cyanobacteria are extensive and highly visible and they can form in both freshwater and marine environments.

In other news, Namibia’s environmental commissioner Timoteus Mufeti recently defended Canadian company Reconnaissance Energy Africa‘s plan to drill the Kavango Region for oil and gas. He told The Namibian that the exploration activities “will not cover the entire licence area and will be limited to areas situated about 80 kilometers south of the Okavango River, 40 kilometers from the boundary of the Khaudum National Park and is more than 260 kilometers from the Okavango Delta in Botswana.”