Award-winning actor Baron Geisler was one of the artists whose works were featured during the Smile with Us on World Smile Day event at I’M Hotel in Makati City on Oct. 5. The event was organized by Smile Train Philippines to honor their partner organizations and doctors who helped them achieve their goal to create better future for Filipinos born with a cleft.

Smile Train is an international children’s charity that provides free cleft repair surgery and comprehensive cleft care to children in more than 85 developing countries including the Philippines. Since 2001, the charity has performed more than 44,000 surgeries in the country.

Aside from Geisler, several Filipino celebrities were present during the Smile with Us on World Smile Day event. Among them were actors and couple Aubrey Miles and Troy Montero, Miss World 2013 Megan Young and Raflesia Bravo, Geisler’s girlfriend and co-star in the theater play “Aurelio Sedisyoso.”

Young and Miles were introduced as celebrity ambassadors of Smile Train Philippines during the event. They will help raise awareness and funds for the cause of the charity. 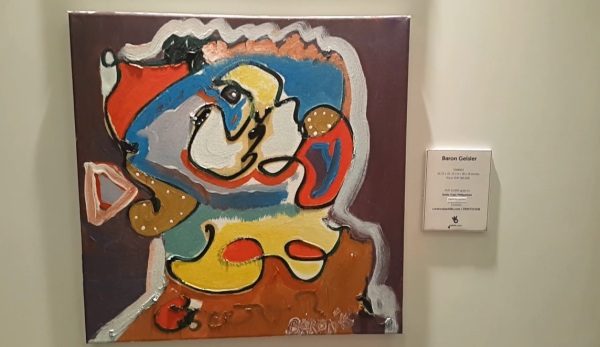 a painting by Baron Geisler

Artworks by Geisler’s fellow AOK artists Ivy Lim, Nasser Lubay, Paul John Pacion and Lhean were exhibited during the event. Fifteen percent of the proceeds from the 17 artworks of the five artists will be awarded to Smile Train Philippines.

Geisler felt very lucky that Smile Train Philippines contacted him via AOK Philippines to join the event that helps children with cleft, which he described as a magnificent one. He also told his fans to wait for a possible one-man show featuring his artworks in the future.

Meanwhile, Geisler is set to star in Brillante Mendoza’s “AMO” and “Right to Kill.” Watch my interview with the actor-painter here: