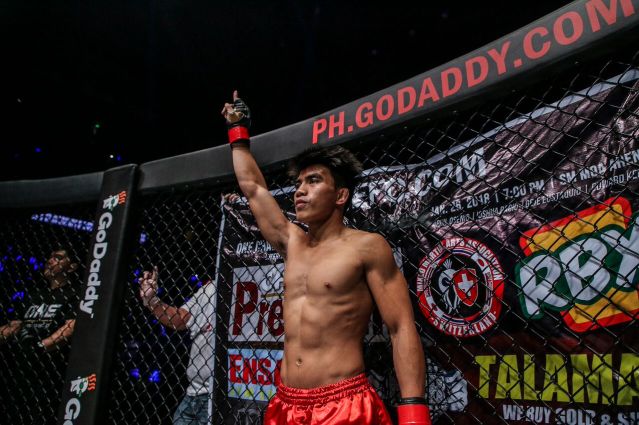 It has been two years since Joshua “The Passion” Pacio, 22, fought for a world title. Representing Team Lakay and fighting out of Baguio City, Philippines, he is often asked about his second title shot.

Pacio recently said he is amazed by the things going on around him. In particular, he is inspired by his Team Lakay teammates, reigning ONE Flyweight World Champion Geje “Gravity” Eustaquio and ONE Interim Bantamweight World Champion title contender Kevin “The Silencer” Belingon.

“Kuya Geje (Eustaquio) just won the flyweight world title, and now Kuya Kevin (Belingon) is going to be fighting for the bantamweight title,” Pacio shared. “This has lit a spark inside of me and now I am more energized in training. I want to be where they are now.”

Eustaquio became the new ONE Flyweight World Champion by dethroning Adriano “Mikinho” Moraes, 29, of Brazil at “ONE: Pinnacle of Power” on June 23, 2018. On July 27, 2018, Belingon will compete for the ONE Interim Bantamweight World Championship against Martin “The Situ-Asian” Nguyen, 29, of Australia at “ONE: Reign of Kings”at the SM Mall of Asia Arena in Pasay City, Metro Manila, Philippines.

Pacio has been on an incredible run since making his ONE Championship debut in 2016. In his third bout in the promotion, he already earned himself a shot at the ONE Strawweight World Championship held by reigning titleholder Yoshitaka “Nobita” Naito, 34, of Japan.

Although Pacio fell just short of victory in his first world title opportunity, the next generation Team Lakay proponent soldiered on and to this day continues to improve with every bout. He will return to action at “ONE: Reign of Kings” where he will take on unbeaten contender Pongsiri “The Smiling Assassin” Mitsatit, who is fighting out of Chiang Mai, Thailand and is representing Tiger Muay Thai.

Surrounded by world champions, Pacio is fueled by inspiration emanating from his Team Lakay teammates who have reached the pinnacle of the sport. He feels he is steadily improving his skills so that when ONE Championship does give him the call he’s been waiting for, he will be ready.

“I’m learning and growing and gaining more experience with each passing bout,” Pacio said. “I can feel myself getting stronger and better. I can see the improvements in my performances. As a martial artist, this is why I work so hard.”

The strawweight bout between Pacio and Mitsatit will be an exciting one. The Team Lakay warrior will display his wushu striking pedigree while the undefeated fighter from Tiger Muay Thai will exhibited his powerful Muay Thai.