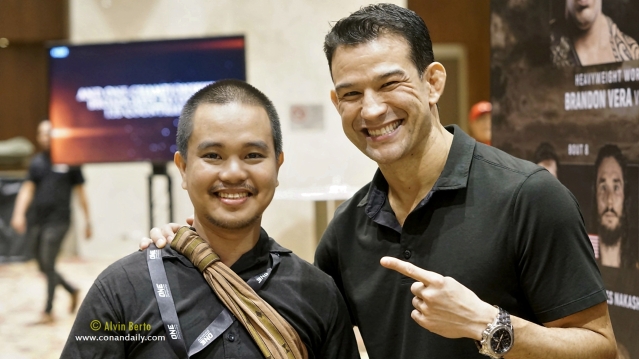 Samy “AK47” Sana, 29, of Paris, France and Armen Petrosyan, 32, of Gorizia, Italy will compete in one of the ONE Super Series matches at “ONE: Conquest of Champions.” Days prior to the fight night, I asked Mitch Chilson, a former ONE Championship fighter who now serves as a commentator, about his prediction of the upcoming fight.

“Who can count out Petrosyan?” Chilson remarked. “The Petrosyans are the greatest kickboxers in the world, you know.”

“ONE: Conquest of Champions” will take place at the SM Mall of Asia Arena in Pasay City, Metro Manila on November 23, 2018. In the sixth bout of the evening, Sana and Petrosyan will compete in a kickboxing contest at a catch weight of 73 kg and both are competing in ONE Super Series for the second time.

Sana is representing Venum. He is of French and Algerian descent.

On the other hand, Petrosyan is of Armenian and Italian descent. He is the younger brother of Giorgio “The Doctor” Petrosyan, 32.

Chilson pointed out that Sana and Armen are both world champions. However, the Armenian-Italian kickboxer is more likely to win the kickboxing match at “ONE: Conquest of Champions,” the ONE Championship fighter-turned-commentator opined.

“I like the Petrosyans a lot,” Chilson said. “They have a beautiful style of kickboxing. The way they hammer their legs out, follow through with the right hand. They throw their right hand and then follow with the left hand. Their 3 or 2 combination is beautiful.”

Giorgio was present during the “ONE: Conquest of Champions” kick-off press conference at the City of Dreams Manila in Parañaque City, Metro Manila, Philippines on November 20, 2018. The event was hosted by Chilson.

On November 9, 2018, Giorgio competed in ONE Super Series for the second time. He defeated Sorgraw Petchyindee Academy, 25, of Prakhon Chai, Buriram, Thailand via unanimous decision at “ONE: Heart of the Lion” at the Singapore Indoor Stadium in Kallang, Singapore.

It was Sorgraw’s second bout in ONE Super Series. When he made his debut in the striking-only league of ONE Championship at “ONE: Spirit of a Warrior” at the Thuwunna Indoor Stadium in Yangon, Myanmar on June 29, 2018, he defeated Sana via unanimous decision.

Like Sana, Armen is coming out of an unsuccessful ONE Super Series debut. On July 27, 2018, Armen lost to Chris “The African Warrior” Ngimbi, 34, of the Democratic Republic of Congo via unanimous decision at “ONE: Reign of Kings” at the SM Mall of Asia Arena.