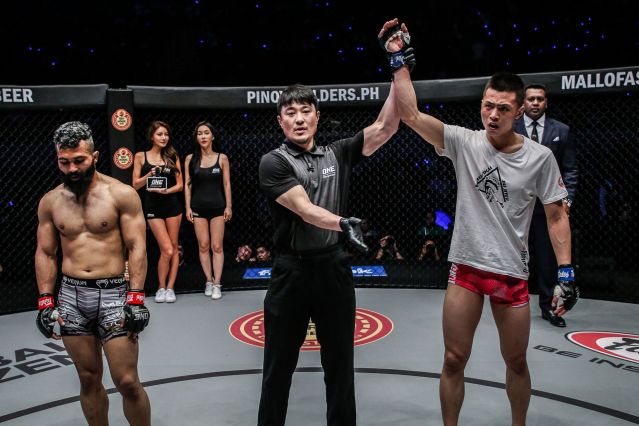 Training out of Tianjin Top Team in Tianjin, China, “The Stalker” Xie Bin, 21, was one of the winners at “ONE: Roots of Honor.” It was his seventh victory in ONE Championship.

Featuring two kickboxing contests, two Muay Thai bouts and 11 mixed martial arts matches, “ONE: Roots of Honor” took place at the SM Mall of Asia Arena in Pasay City, Metro Manila, Philippines on April 12, 2019. In the fourth bout of the evening, Xie faced “Lycan” Ahmad Qais Jasoor, 29, of Kabul, Afghanistan in an MMA match in the bantamweight division with Yoshinori Umeki as the referee.

It was a competitive opening round between the two bantamweight contenders as they displayed their grappling skills by trading submission attempts. In the second round, Xie wasted little time in getting the action to the ground.

Umeki put a stop to the bantamweight contest after 2 minutes and 27 seconds. Xie worked his way into a deep D’Arce choke that left Jasoor with no other option but to tap out.

Winning at “ONE: Roots of Honor” improved Xie’s professional MMA record to 7 wins and 2 losses. On the other hand, Jasoor now has 5 wins, 2 losses and 1 draw.

Including Afghanistan and China, 18 countries were represented at “ONE: Roots of Honor.” The other countries were Australia, Brazil, Cuba, Indonesia, Japan, Mongolia, Morocco, the Netherlands, the Philippines, Romania, Serbia, Singapore, South Korea, Thailand, Vietnam and the United States.

Xie has been competing in ONE Championship since 2016. The first six opponents he defeated in the promotion were Ma Shuang, 28, of Harbin, China, Mario Satya Wirawan, 28, of Bogor, Indonesia, Chan Rothana, 33, of Phnom Penh, Cambodia, Huang Shi Hao, 26, of Singapore, Sor Rey, 33, of Cambodia and Hisyam “Zephyrus” Samsudin, 28, of Kota Kinabalu, Malaysia.

Watch Xie’s ring walkout at “ONE: Roots of Honor” here:

Check more photos from Jasoor and Xie’s bout at “ONE: Roots of Honor” on Top Sports Asia.