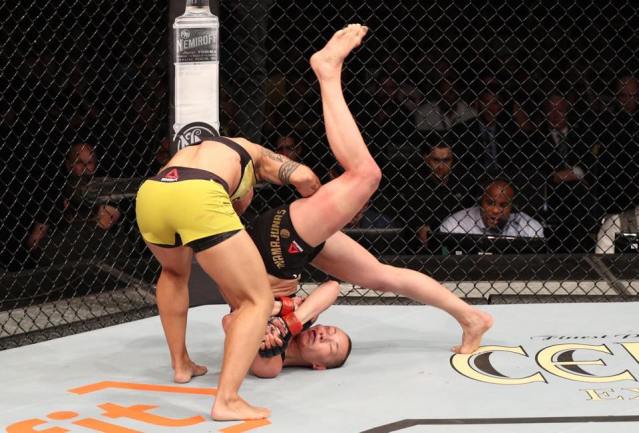 Jéssica “Bate Estaca” Andrade, 27, of Umuarama, Paraná, Brazil was crowned the new UFC Women’s Strawweight Champion at “UFC 237.” It was her 11th victory in the Ultimate Fighting Championship.

Featuring 12 mixed martial arts matches, “UFC 237” took place at the Jeunesse Arena in Rio de Janeiro on May 11, 2019. In the main event of the evening, Andrade challenged Rose “Thug” Namajunas, 26, of Milwaukee, Wisconsin, United States, the then reigning UFC Women’s Strawweight Champion, with Marc Goddard as the referee.

Goddard put a stop to the title bout after 2 minutes and 58 seconds in the second round. Andrade knocked out Namajunas via slam.

Winning at “UFC 237″improved Andrade’s professional MMA record to 20 wins and 6 losses. On the other hand, Namajunas now has 8 wins and 4 losses.

The last time Andrade lost in the UFC octagon was on May 13, 2017. She lost via unanimous decision to former UFC Women’s Strawweight Champion Joanna Jędrzejczyk, 31, of Olsztyn, Poland at “UFC 211” at the American Airlines Center in Dallas, Texas, USA.

Jędrzejczyk lost to Namajunas twice, first when the latter dethroned the former as the UFC Women’s Strawweight Champion on November 4, 2017 at “UFC 217” at Madison Square Garden in New York City, New York. During their rematch on April 7, 2018 at “UFC 223” at the Barclays Center in Brooklyn, New York, Namajunas won via unanimous decision.