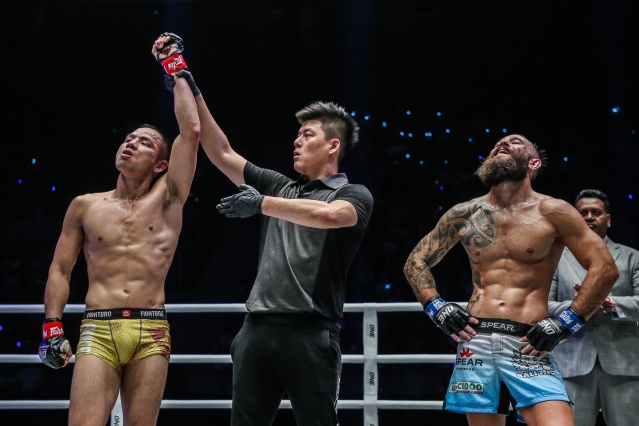 “Rock Man” Chen Lei, 30, of Changde, Hunan, China was one of the winners at “ONE: Legendary Quest.” It was the Chinese mixed martial artist’s eighth victory in ONE Championship.

Featuring three Muay Thai matches, two kickboxing contests and nine MMA bouts, “ONE: Legendary Quest” took place at the Baoshan Arena in Shanghai, China on June 15, 2019. In the sixth bout of the evening, Chen fought Anthony “The Archangel” Engelen, 33, of Jakarta, Indonesia in an MMA match at a catch weight of 67.5 kg with Kemp Cheng as the referee.

After three five-minute rounds, the catchweight bout was left in the hands of the judges. In the end, Cheng raised the hand of Chen, who was declared the winner via unanimous decision.

Winning at “ONE: Legendary Quest” improved the professional MMA record of Chen to 6 wins and 1 loss. On the other hand, Engelen now has 8 wins and 7 losses.

Chen was one of the five hometown heroes who competed at “ONE: Legendary Quest” while Engelen was one of the two representatives of Indonesia. Australia, Brazil, Egypt, Japan, Malaysia, Morocco, Myanmar, the Netherlands, the Philippines, Scotland, South Korea, Thailand and the United Kingdom were also represented.

On June 12, 2019, Chen and Engelen had their official face-off during the press conference at Yunspace in Shanghai. The event was graced by ONE Championship Greater China chairman Hua Fung Teh and reigning ONE Women’s Strawweight World Champion “The Panda” Xiong Jing Nan, 31, of China.

Born in Changsha, China on December 31, 1988, Chen is a former Shanghai Open Brazilian Jiu-Jitsu Champion. As an MMA fighter, he has been competing professionally since 2017 and he in the same year, he joined ONE Championship.

“ONE: Legendary Quest” marked Chen’s sixth ONE Championship bout. He is training of out Equilibrium Beijing in Beijing, China.

Engelen is the second Indonesian opponent Chen defeated in ONE Championship following Jeremy “Predator” Meciaz, 27. The other three opponents who lost to Chen in the promotion were Saiful “The Vampire” Merican, 30, of Malaysia; Burn “Hitman” Soriano, 33, of the Philippines and “Lycan” Ahmad Qais Jasoor, 29, of Kabul, Afghanistan.