China’s Wang Junguang earns 1st ONE Super Series win at at ‘ONE: Dawn of Valor’ in Jakarta, Indonesia 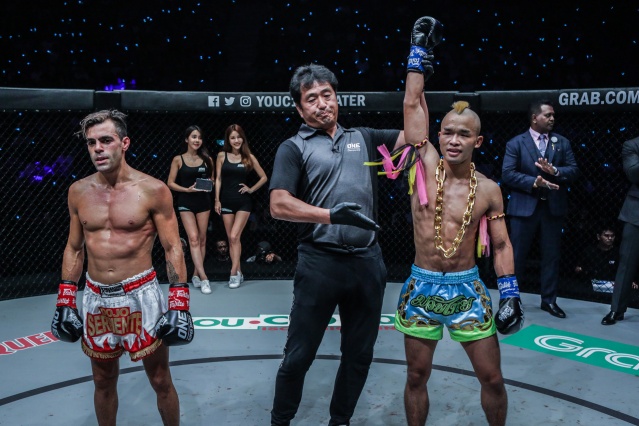 “Golden Boy” Wang Junguang, 24, of China has earned his first victory in ONE Championship’s striking-only league ONE Super Series. He was one of the winners at “ONE: Dawn of Valor,” which took place at the Istora Gelora Bung Karno in Jakarta, Indonesia on October 25, 2019.

“ONE: Dawn of Valor” featured 13 mixed martial arts bouts and three ONE Super Series contests, which are two kickboxing contests and one Muay Thai fight. In the 11th bout of the evening, Wang competed in a kickboxing bout at a catch weight of 59kg against Federico “The Little Big Man” Roma, 34, of Argentina.

Atsushi Onari served as the referee. Although Roma was game and up for the challenge, he was clearly overwhelmed by Junguang’s powerful and accurate strikes.

Junguang knocked Roma down three times across three minutes of intense action to earn the finish. Onari put a stop to the contest after 2 minutes and 59 seconds in the first round.

Including Argentina and China, 15 countries were represented at “ONE: Dawn of Valor.” The others were Argentina, Australia, Brazil, China, Indonesia, Japan, Kyrgyzstan, Myanmar, the Netherlands, New Zealand, the Philippines, Sweden, Tajikistan, Timor Leste and the United States.

Roma solely represented Argentina. He is training out of Dojo Serpiente.

Wang was one of the two representatives of China. He is an independent fighter.

Both Junguang and Roma were ONE Super Series debutantes at “ONE: Dawn of Valor.” Here is a recap of the event from Michael Schiavello and Mitch “The Dragon” Chilson: