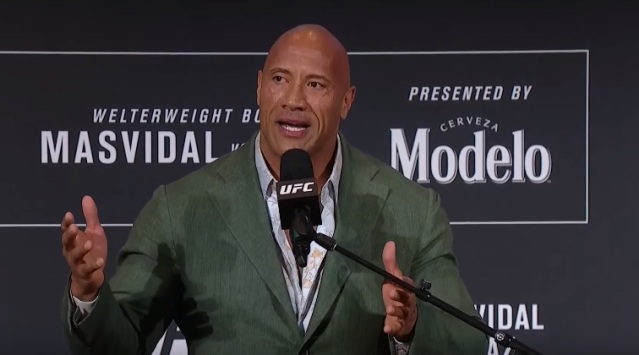 Former professional wrestler Dwayne “The Rock” Johnson, 47, will star in a film about a retired professional mixed martial artist. He recently announced that he will play former UFC fighter Mark “The Smashing Machine” Kerr, 50, of Phoenix, Arizona, United States in a biopic.

On November 1, 2019, Johnson attended the press conference for “UFC 245” at the Hulu Theater at the Madison Square Garden in New York City, New York, USA. He announced the upcoming film about Kerr.

“Mark Kerr’s story is such an incredible story,” Johnson said. “Here’s a guy that won the UFC heavyweight tournament twice, went over to Pride.”

“He’s still alive and what’s interesting about his story is that he’s achieved so much in life,” Johnson said of Kerr. “But like all of us, he’s battled these demons of addiction and mental health. He’s hit rock bottom but the best part about Mark Kerr is that he gets up and wants to do a little better than he did today.”

Dwayne attended the University of Miami where he played as a football player. He won a national championship in 1991.

After competing in the World Wrestling Federation (WWF), which is now called World Wrestling Entertainment (WWE), for eight years, Dwayne pursued a career in acting. Among his most memorable film roles is Luke Hobbs in the “Fast and Furious” film series.

TOMORROW night, the biggest and most electrifying @UFC event of 2019. @natediaz209 vs @gamebredfighter for the BMF Title. Very cool honor for me to wrap the BMF title around the waist of the winner. I want these two warriors (and all the fighters) to make as much bread💰as they can tomorrow night and have some fun doing it. There’s people who do what they do — and then, there’s the bad MF’s. Don’t miss #UFC244 only on PPV. Madison Square Garden will be rockin. #BMFTitle #IfYaSmell #MasvidalDiaz ⚡️

On November 2, 2019, Dwayne will attend the “UFC 244” fight night at the Madison Square Garden. He will present the BMF belt to the winner of the main event, which is a welterweight bout between  Jorge “Gamebred” Masvidal, 34, of Miami, Florida, USA and Nate Diaz, 34, of Stockton, California, USA.

8 ways you can lose your nursing license