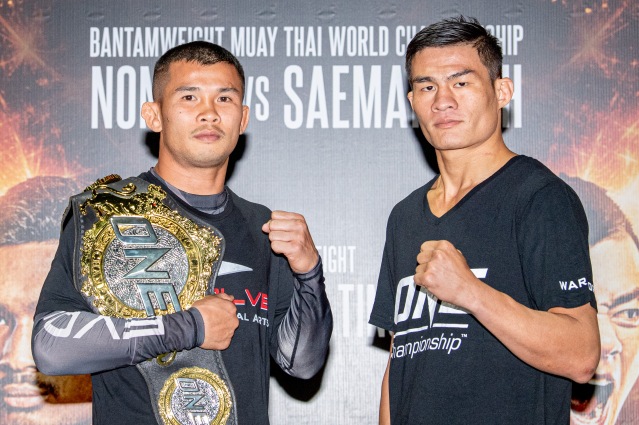 Nong-O Gaiyangdao, 33, of Bangkok, Thailand was one of the “ONE: Edge of Greatness” fighters who participated in the open workout at the Evolve Far East Square in Singapore on November 19, 2019. The reigning ONE Muay Thai Bantamweight World Champion is training out of Evolve MMA in Singapore.

“This will be my first time fighting here in Singapore so I am very grateful to be able to perform in front of my friends, my family and my students,” Nong-O said. “To be able to defend my title here, it will be a special moment in my career. I am looking forward to victory and I can’t wait to give my best for the crowd.”

Featuring four Muay Thai matches and six MMA bouts, ONE Championship will hold “ONE: Edge of Greatness” at the Singapore Indoor Stadium in Singapore on November 22, 2019. In the main event of the evening, Nong-O will defend his ONE Muay Thai Bantamweight World Championship title from Saemapetch Fairtex, 23, who is training out of Fairtex Gym in Pattaya, Thailand.

During the “ONE: Edge of Greatness” workout at the Evolve Far East Square, the athletes came out to showcase their skills to fans and media in attendance. They also took time to address the media and talk about their upcoming bouts.

“I feel privileged and honored to be able to share my style of fighting with the world,” Nong-O stated. “I have the ability to make adjustments and adapt to my opponent’s style in the ring. I think this will be key against Saemapetch.”

Nong-O became the inaugural ONE Super Series Bantamweight Muay Thai World Champion on February 16, 2019. He earned the title by defeating Han Zi Hao, 23, of China in the main event of “ONE: Clash of Legends” at the Impact Arena in Bangkok, Thailand.

On September 6, 2019, Nong-O defended his belt successfully for the second time. He defeated Brice Delval, 20, of Algeria in the main event of “ONE: Immortal Triumph” at the Phu Tho Indoor Stadium in Ho Chi Minh City, Vietnam.

Gianni Subba hosted the “ONE: Edge of Greatness” workout at the Evolve Far East Square. Here is a clip: