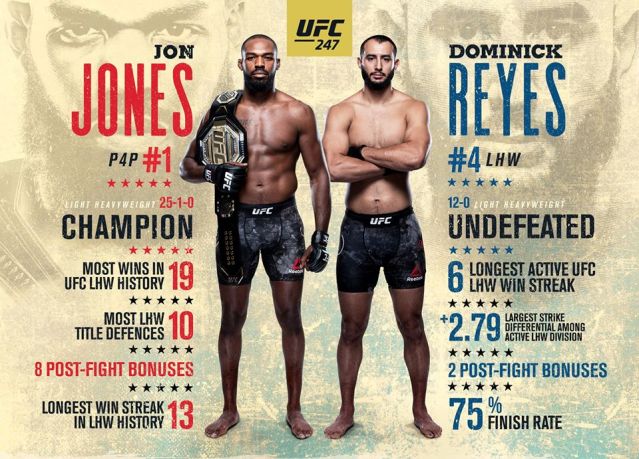 Many mixed martial arts experts and fans are not happy about the loss of Dominick “The Devastator” Reyes, 30, of Victorville, California, United States to the reigning UFC Light Heavyweight Champion Jon “Bones” Jones, 32, of Rochester, New York, USA at “UFC 247.” The defending champion won via unanimous decision, breaking the undefeated record of the challenger.

Featuring 12 MMA matches, the UFC held “UFC 247” at the Toyota Center in Houston, Texas, USA on February 8, 2020. The title bout between Jones and Reyes was the main event.

It was Dan Miragliotta who served as the referee. Get to know the three judges and how they scored the bout:

Months after serving as a referee to a fight with an HIV-positive fighter at “Glory 52” on  March 31, 2018 in Long Beach, California, Rosales sued the California State Athletic Commission. Meanwhile, here is how he scored the “UFC 247” main event:

Solis gave Andre “Mr. Highlight” Ewell a score of 30 and Jonathan “Dragon” Martinez a score of 27 in their bantamweight bout at “UFC 247.” The second judge saw it 29-28 in favor of Ewell while the third judge scored it 28-29 in favor of Martinez.

Among the three judges of the “UFC 247” main event, only Solis gave Jones four out of five rounds as the other two gave the defending champion only three. Here are Solis’s scores:

By beating Reyes at “UFC 247,” Reyes became the MMA fighter with the most title fight victories in the UFC. Here is the reigning UFC Light Heavyweight Champion’s post-fight backstage interview:

.@JonnyBones reflects on passing GSP for all-time title victories, being surprised by Reyes, and where tonight's fight ranks among his all-time toughest tests #UFC247

Hear from the champ 🔊 ⬇️ pic.twitter.com/qeyTMV6j8I